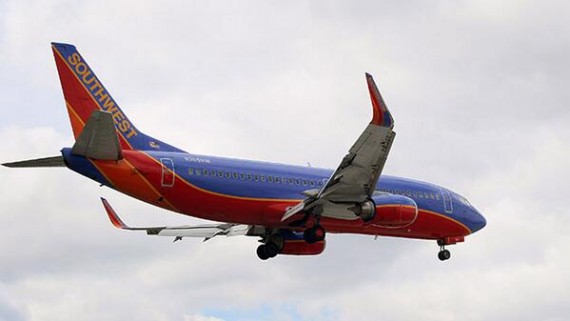 "Some gentleman just decided that he wanted us to visit the Lord today, and decided to open up the back hatch of Southwest Airlines flight while we were already up in the air," Monica Lawler of Diamond Bar, Calf told KABC.

The man reportedly headed to the aircraft's bathroom and walked out drenched in water before going to the rear of the plane and attempting to lift up the airplane's back hatch.

Another passenger reportedly stepped in and managed to abruptly get control of the suspect and keep him on the ground KABC reported.

"He got up and went to the rear of the plane and tried to open up the hatch. One of the airline stewardess just started screaming as well as passengers screaming help," Lawler told KABC.

"You heard the guy saying OK, well emergency landing and we landed in Nebraska, and all the police and TSA agents came on and got this guy off of there, and needless to say, we were applauding the gentlemen that held him down," Lawler told KABC.

According to KCRA, other passengers assisted.

"You got this bad feeling that wasn't going right, especially when a bunch of big guys got up and immediately jumped into the aisle and ran to the back of the plane," Lori Depalma another passenger told KCRA.

Officials do not know if drugs or mental illness played a role in the incident KABC reported.

The flight arrived in Sacramento two hours later than its original arrival time.

The man could or could not face charges KABC reported.

"I ran to the back of the plane, where I was joined by two other people. We tackled the guy and held him down. He was going to do bad things to the plane," Scott Porter, a doctor traveling on the flight told KCRA.

According to The Daily Mail, flight 722 was staffed with five crew members, and 134 passengers.