Subway Big Mama: Customers See Words Written On One of Her Flatizza Boxes 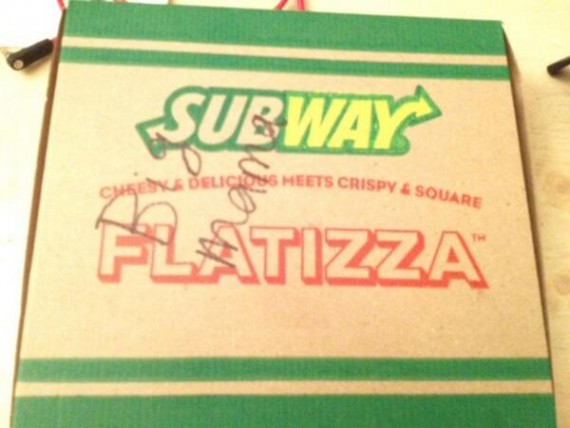 A woman who found the words Big Mama written on one of the Flatizza boxes she ordered.

Allison Brown saw the words scrawled on one of two of the franchise chain's Flatizza boxes she ordered from the company's restaurant at 1906 Hacienda Drive in Vista, Calif ABC television affiliate KGTV in San Diego reported. Brown also bought one of Subway's six-inch tuna sub sandwich.

"It's not right. It's not right," Brown of Murrieta, Calif located in the state's Riverside County told KGTV.

"We all come in different shapes and sizes, and then you see something like this. Big Mama? How is that helping anybody?"

The incident has reportedly caused Brown to lose interest in visiting another Subway KGTV reported.

"I will never stop foot in a Subway again. You couldn't pay me to eat there again."

Sanjiv Mehta who owns the franchise restaurant location where the incident happened does not stand for the events of the case, and feels he took appropriate action to correct the situation.

"As a small business owner, I do not tolerate discrimination of any kind. When I learned of this incident I immediately investigated and disciplined the employee involved. I also made contact with the customer in an effort to resolve this matter."

Brown reportedly approached the owner of the Subway restaurant who then expressed regret and spoke to the employee who wrote the words KGTV reported.

"He just said he doesn't know better. He kept trying to explain it to him and his worker didn't get it," Brown told KGTV.

As a result of the written words, Brown reportedly would like Subway employees to receive anti-discrimination training from a third party company.