McDonald's global sales higher in May, down in the US 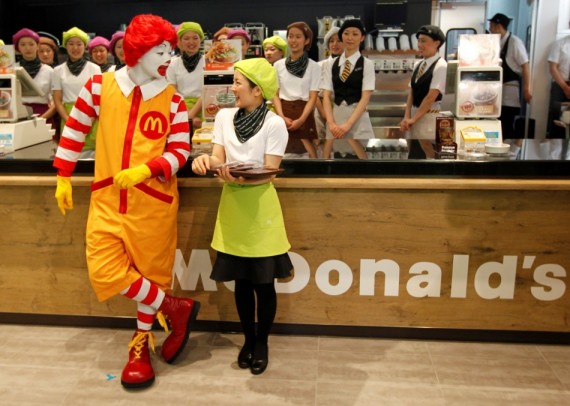 McDonald's Ronald McDonald chats with a counter staff prior to the opening of its Harajuku-Omotesando shop in Tokyo(Photo : Reuters)

Meanwhile, the food giant said same-store sales in the U.S. fell 1 percent last month, extending its longest stretch without comparable growth in its core market in more than a decade. That marked the sixth month in the past seven when sales dropped in its largest market by number of restaurants. For April, McDonald's said U.S. same-store sales were flat from a year earlier.

Internationally, a rebound in China after last year's worries about avian flu helped lift sales by 2.5 percent in its Asia, Middle East and Africa division. That in turn lifted global sales 0.9 percent for May.

In Europe, same-store sales rose 0.4%, driven by positive performance in the U.K. and France, offset by declines in Germany. Those sales were up 2.5% in Asia, the Middle East and Africa, led by strong demand in China.

"McDonald's U.S. business is heightening its customer focus through service, value and menu initiatives to stabilize results," the company said.

The company's shares are up more than five per cent so far this year.