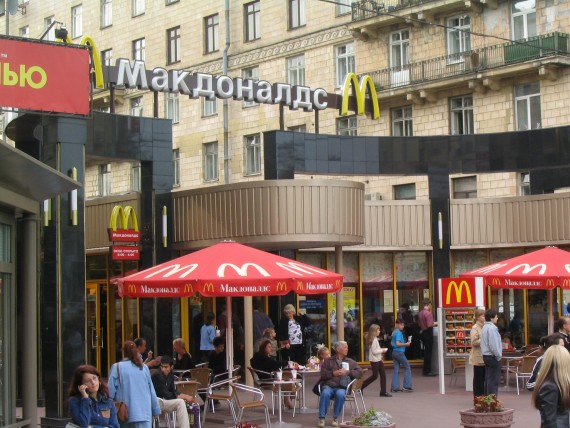 McDonald's reported Friday that 12 of its branches in Russia temporarily shut down due to the allegations of sanitary violations.

On Wednesday, three Mcdonald's restaurants Moscow's Manezh square were reported shut down due to breach of sanitary regulations and another one was suspended by the food safety watchdog. The figure increased Friday as more stores in the region closed.

The fast food chain added that at least a hundred of its stores around the region will undergo further inspections. They are currently studying the state food safety regulator's accusations to speed up the re-opening of their stores. Officials have been dropping in unannounced to conduct inspection at McDonald's restaurants across the country.

Aside of shutting down the stores, Russian officials attempts to get McDonald's popular burgers and shakes banned by suing them. Though the regulators argued violations of sanitary rules, the timing is impeccable. It's been reported before that the government watchdogs target  the American fast food chain.

A number of analysts believe that the American franchise suffers the blow in the on-going dispute between U.S. and Russia. The spat between the two countries extend out of the politics' stage and spreads to the corporate world. Analysts link the shut down of the stores to conflict in Ukraine and believe that it has affected the trade relations between the countries.

This year, President Vladimir Putin annexed Crimea, the area of the Ukraine-Russia standoff, so the U.S. and European Union sanctioned against Russian companies. In retribution, Putin imposed a ban of an estimate of $9.5 billion in food imports from Western countries.

McDonald's led the ways for the communist nation to open its doors to foreign franchise when it arrived in the country in 1990. Its first store is one of stores temporarily closed.

According to franchise's annual report on 2013, Russia is their seventh largest market outside U.S. And Canada, with 440 stores in operation. An estimate of 1 million customers daily flock McDonald's restaurants in the country.