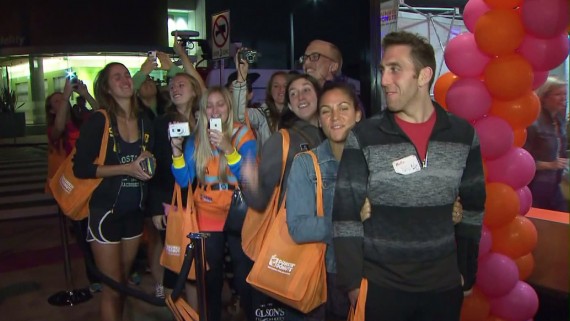 Dunkin' Donuts opened its first storefront in the Santa Monica, Los Angeles early Tuesday. It's welcomed by an explosive response as people camped out for the grand opening.

Some people camped out as early as Sunday just to be one of the first 100 customers who'll get free tote bags with special gifts from the donut chain. The eager customers took to social media to document the whole thing. Most of the posts show photos of the long line of people waiting for the opening of the pastry chain.

Johnny Hoops, a Burbank actor, lined up for 30 hours. His effort paid off as he's the first one in and receives more than a tote bag-he also got free coffee for a year.

The franchise owner Gary Haar couldn't believe the more than 200 people who lined up for the opening. "This is far from routine," said Haar.

According to a news report released by the company, the 5 a.m. grand opening included a ribbon cutting ceremony, a performance from the brand's mascots, and surprise giveaways. There's also a California-inspired donut to commemorate the event.

It's not the first Dunkin' Donuts store in California, but it has been more than a decade since there's one in SoCal. The popular fast food chain had several branches in Los Angeles but closed down in the late '90s.

"We're certain Dunkin' Donuts will quickly become an integral part of Angelenos' daily routine," said Paul Twohig, Dunkin' Donuts' president in the U.S. and Canada. He said that there had been requests for the chain to open in LA, and they're glad that they have come into operation ahead of schedule.

Dunkin' Donuts opened its first branch in North California on Aug. 26. They plan to open five more stores in Orange and L.A. counties this year and about 200 more in the next couple of years.