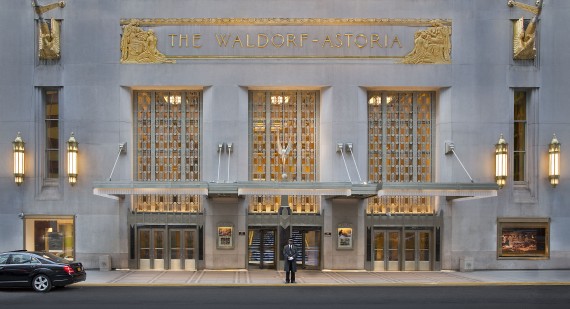 Hilton Worldwide said it intends to use the proceeds from the sale to acquire additional hotel assets in the US. The company said that for the next 100 years they will continue to manage the hotel as part of the agreement with Anbang.

Beijing-based insurance company Anbang joins a string of Chinese companies that are taking stakes in big brands in the U.S. The sale of the Waldorf Astoria comes a year after Chinese investment firm Fosun International bought another New York landmark property, the One Chase Manhattan Plaza, the old central office of Chase Manhattan Bank.

In 2007, Hilton Worldwide Holdings Inc. has taken private by Blackstone Group LP. December 2013 when the hotel chain returned to the public stock market.

It was in March 1893 when a millionaire named William Waldorf Astor opened a 13-story Waldorf Hotel. Four years later the Astoria Hotel opened. In October 1931, the luxury hotel opened on Manhattan's Park Avenue and was known to be the tallest and largest hotel in the world.

According to the Guardian, Conrad Hilton earned the management right in 1949 and called the property "the greatest of them all."

The hotel a home for Marilyn Monroe in 1955 as she lived on the $1,000-a-week suite. Decade later, the hotel became the setting for the first big film that was shot almost in a hotel and away from Hollywood's studio, starring Ginger Rogers for "Weekend at The Waldorf".

In 1993, the hotel became and official landmark in New York City along with the Empire State Building and the Brooklyn Bridge.