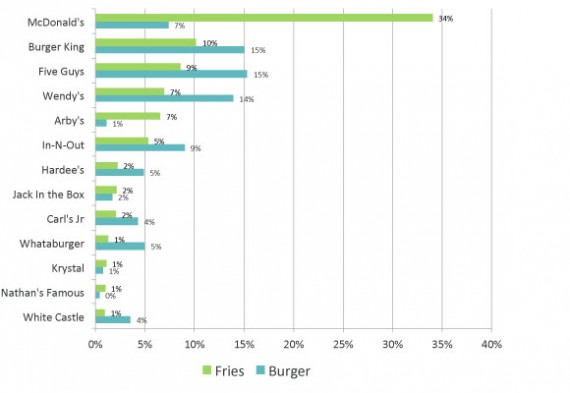 A chart showing the results of the survey(Photo : YouGov.com)

In a recent survey conducted by YouGov, a third of Americans favor Burger King and Five Guys with the best burger among fast food chains.

Burger King and Five Guys both received 15% of the votes of the surveyed U.S. residents. Wendy's ranks second with 14% of votes, followed by Wendy's and In-N-Out with 14% and 9 %, respectively. McDonald's, which is favored by 7% of the respondents, is only ranked 5th.

When it comes to fries, McDonald's is ranked first with 34% respondents favoring the brand, a huge difference from Burger King (10%) and Fast Guys (9%) which are placed second and third, respectively.

For breakfast, McDonald's tops the list with 17% of votes. Burger King is a close second with 16%. However, for New Yorkers Burger King offers the best breakfast menu with 19% of them choosing the brand.

YouGov said New York often reveals a different result compared to majority of Americans. While Subway ranks first in healthiest food chain category in the overall survey with 19% of votes, New Yorkers choose Chipotle as the healthiest, 18% of them opting for the fast-casual restaurant.

Georgia-based Chick-Fil-A is favored by 11% of the respondents as the best chain in North America. New York once again shows different result due to having only one Chick-Fil-A store in the city. Respondents from the Big Apple (17%) and Manhattan area (24%) chose Chipotle as the best fast food chain.

The survey was conducted online with 1.2 million individuals, 18 years old and older, agreeing to take part in the study. Questionnaires were sent via email to the base sample. The research period spanned from August 27 to September 16, 2014.