Is This The End Of Kristen Stewart And Robert Pattinson Rumors? ‘The Rover’ Actor Is Engaged To FKA Twigs! Did He Keep It A Secret To His Ex-Girlfriend? 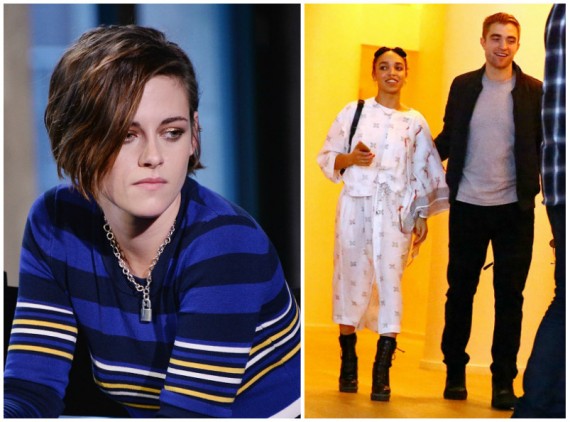 Some Twihards are still hoping to see Kristen Stewart and Robert Pattinson reunite but it seems that it won't happen anymore.

Fans were surprised to find out that the 28-year-old actor is already engaged to FKA Twigs and they have only been dating for five months. He must be truly in love with the 27-year-old singer to pop that question right away.

According to Hollywood Life, he got down on his knees and gave her the ring when it was just two of them in the room.

"He is telling people that he did it shortly before Valentine's Day," an insider revealed. "He was and is very secretive about it only telling a select few family and friends."

"They were together and alone when it happened, he doesn't share what happened," their source explained. "He really has kept that very close to the vest."

People are wondering what the British singer's reaction was when he proposed to her.

"Well she said 'Yes', you can tell they are all about each other and they are equal to each other, you can feel the good vibes that come from them both," their source said.

So when is the big day? Are they going to rush their wedding as well?

"They haven't set a date but friends and family have been told not to expect anything this year. It's going to be a long engagement," their insider revealed. Maybe the actor wanted to assure his new girlfriend that he is very committed to her.

Did he keep it a secret so as not to hurt the "Still Alice" actress?

"Kristen was not told - he didn't reach out to her and tell her. That ship has sailed," their source said. "He doesn't talk to her - they have two completely different lives. She is not a part of his day at all. FKA is his life now," their source said.

Fans should not worry much about the Hollywood superstar because she is also rumored to have taken things to the next level with her rumored girlfriend Alicia Cargile.

"As far as Robert Pattinson goes, that is just a joke," an insider revealed to Radar Online. "Kristen could care less what he does, who he is with, or where he lives."