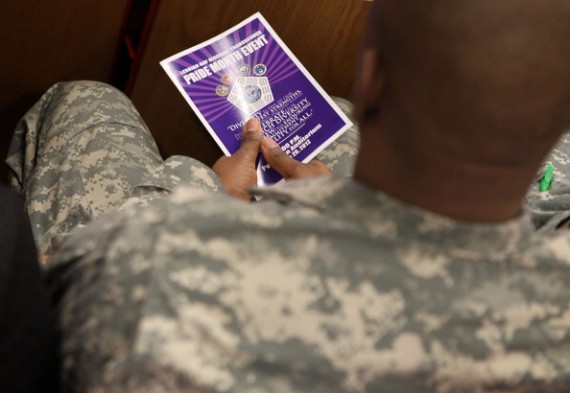 Out-gays in the military is a rarity, a top-brass official proudly introducing his same-sex partner is even more uncommon. It probably takes more courage for military men to introduce their husbands at the Pentagon Gay Pride than fighting for their home countries.

This became the case for Army general Randy Taylor who proudly introduced his husband at the Pentagon Gay Pride Event this week, reports said.

According to The Washington Times, Gen. Taylor was the master of ceremonies during Pentagon's fourth Gay Pride celebration which showcased history of colorful patriotism.

"My husband Lucas is sitting up front here," the married Army general said of his husband sitting in the same row as Defense Secretary Ashton Carter, Army Secretary John McHugh and other high-ranking officials.

The report said Lucas has subjugated his own career in support of Gen. Taylor's "frequent moves" over an 18-year relationship.

Gen. Taylor also reportedly spoke of his strong commitment for equal rights saying, "We need to be meritocracy. We can't afford to close ourselves off to any body... We must start from a position of inclusivity."

This law was repealed in 2010 after both chambers of Congress passed a legislation that provided a way for the discriminatory law not to continue inhibiting the LGBT from becoming military men and women.

The Pentagon Gay Pride celebration kicked off with the National Anthem sung by the Rock Creek Singers with the Gay Men's Chorus.

The event also reportedly featured a panel discussion participated by a homosexual Marine officer, a lesbian chaplain, transgender woman Amanda Simpson who is also the executive director of the Army's Office of Energy Initiatives, and a homosexual Army sergeant.