Tom Cruise Reunites With Suri And Katie Holmes! Will He Leave Scientology For Them? 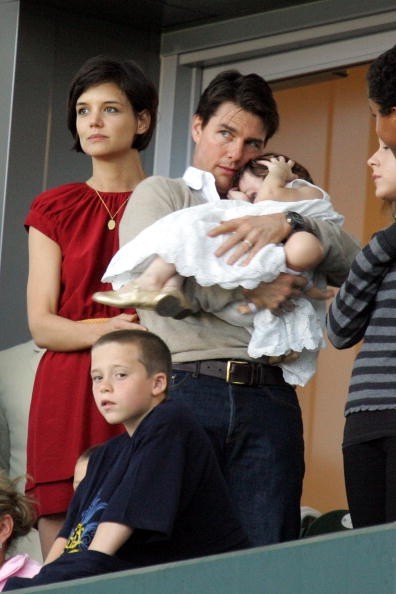 Tom Cruise has been very busy promoting "Mission: Impossible - Rogue Nation" and filming "Mena" but he still managed to take some time off to reunite with Suri.

According to reports, the 53-year-old actor spent three hours with his 9-year-old daughter.

"It was an emotional moment for the two," an insider told Hollywood Life.

The screen heartthrob was in New York City for the premiere of "Mission Impossible 5" so he had arranged a playdate with his little girl at one of the management team member's apartment near Central Park.

According to OK! Magazine, he chose that place instead of Katie Holmes' apartment to avoid the paparazzi.

Back in April, there were rumors coming out that Tom Cruise hasn't seen Suri for more than a year. His representative denied the reports and revealed that the actor has been spending a lot of time with his daughter on a down low to protect her from the media.

However, sources close to his ex-wife Katie Holmes revealed that what the actor's rep claimed was a lie.

According to OK! Magazine, it was only three months since the father-and-daughter duo last saw each other. The website also revealed that their meet up last July was their second playdate this year.

"Their day was apparently lovely, with Tom giving little Suri a huge teddy bear as they played a game of hide-and-seek and read stories," an insider shared.

The source also revealed that Katie Holmes was there too when Tom Cruise reunited with their daughter.

"Suri was so excited," a source said. "It was emotional for both of them. [Tom] was overcome seeing Suri again. He knows he could miss seeing her grow up if he's not careful," the insider added.

There were reports that the Church of Scientology has been prohibiting him from seeing his ex-wife and daughter. But it seems that Tom Cruise may finally leave the organization to be with Suri more and he may even buy an apartment in New York City with Katie Holmes' consent.

"He's between a rock and a hard place, but he's finally making a choice to put his daughter first," an insider told Star magazine via HollywoodLife.