Tom Cruise Ditched Suri For ‘Mission Impossible 5?' Hasn’t Seen His Daughter For Almost A Year! Scientology Stopping Him From Talking To Katie Holmes? 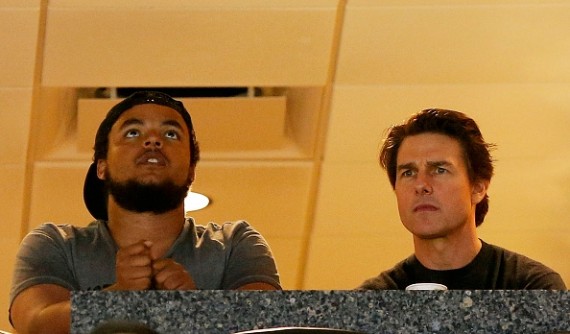 There were reports that Tom Cruise was not able to visit his daughter Suri for almost a year because he was too busy filming "Mission Impossible 5."

The fifth installment was shot in London and other locations overseas, which makes it a bit difficult for the actor to see his 8-year-old child from Katie Holmes.

However, sources revealed to TMZ that they have wrapped up filming and the Hollywood superstar was given a two-week off but he didn't use it to see Suri. Instead, he spent his Sunday with his adopted son Connor Cruise.

The 52-year-old actor and his 20-year-old son from ex-wife Nicole Kidman was spotted watching the NCAA Women's Basketball Tournament in Tampa, Florida.

There were rumors that the "Mission Impossible 5" star has been taking Suri for granted. Tom Cruise's representative denied those rumors and revealed that the screen heartthrob has been spending a lot of time with his daughter but on the down low so he can protect her from the paparazzi.

However, sources close to Katie Holmes claim that what his rep said wasn't true.

There were also speculations that the Church of Scientology was the main reason why Tom Cruise is keeping his distance from his ex-wife and their daughter since they've been labeled as SPs (Suppressive Person). According to TMZ, the organization claims that the rumor is simply not true.

Piers Morgan recently revealed the influence of the Church on the Hollywood actor and the documentary entitled "Going Clear" exposed the truth behind Scientology. According to the British journalist, the organization caused the breakup of Tom Cruise to Nicole Kidman. So it isn't surprising if they are also stopping him from seeing Katie Holmes and Suri Cruise.

In a separate report from TMZ, they revealed that the former husband and wife are not on speaking terms even if it's about their own daughter.

"There are no direct co-parenting discussions. Everything regarding Suri -- visitation, child-rearing, etc. -- is handled through intermediaries," their sources said.

The "Mission Impossible 5" star is also allegedly concerned with the negative influence of Katie's other boyfriends on Suri. There have been reports that the 36-year-old actress is dating Jamie Foxx, who co-starred with Tom Cruise in the 2004 film "Collateral."