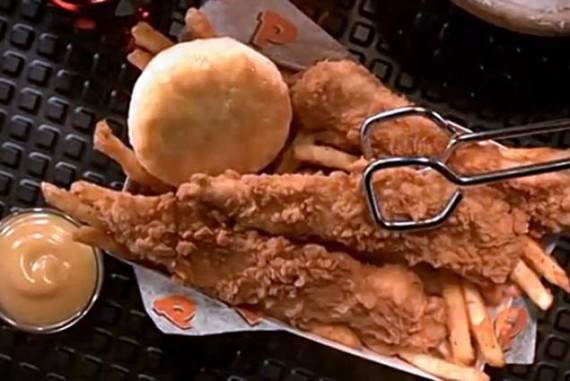 Popeyes is debuting chicken waffle tenders - which is white meat chicken battered in a waffle coating and then deep-fried - on July 29, according to reports.

According to Advertising Age, the limited-time chicken strips with a waffle batter will be served with a maple syrup sauce and fries.

Dick Lynch, chief global brand officer at Popeyes, explained that players finished so late that if they wanted a meal, restaurants and diners would still have fried chicken available while prepping waffle batter.

Popeyes hf as built a nationwide brand by staying true to its Louisiana roots. The sweet and salty combination of chicken and waffles is seen as a West Coast treat, popularized by restaurants like Roscoe's House of Chicken and Waffles.

Chicken and waffles started appearing on the same plate at the Well's Supper Club in Harlem, N.Y., according to NPR. Well's was a hot place for jazz musicians of the 1930s to grab a bite after their gigs. By the time these musicians dropped in, it was too late for dinner and too early for breakfast. So Well's served a combination platter of chicken and waffles, soon becoming popular with the likes of Sammy Davis Jr. and Nat King Cole.

The Chicken Waffle Tenders are going to be the first in a series of limited-time menu items form Popeye's, pending the items success.