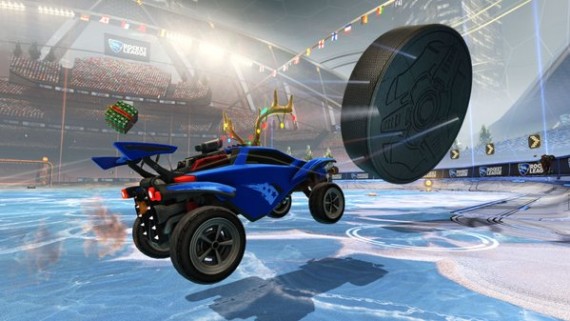 Psyonix brings a festive mood to "Rocket League" with an update that adds a new hockey mode as well as holiday-themed content.

"It adds a new mutator which replaces the ball with a puck and an ice rink stadium," PCGamesN said.

Despite the icy surface presumably being slippery, players aren't saying that it is and handling remains the same as ever, according to PC Gamer.

But the same can't be said for the puck.

"Those large flat sides cause it to hug walls instead of bouncing back, the website said adding, "and with enough force it can surf the length of the boundary."

PC Gamer recommended players to stay defensive and said the puck is a great tool for those who "haven't learned to play off the wall yet."

The website described the "Rocket League" update as more of an expansion than a mutator mashup.

After each game, players can see if they've picked up any of the said items until Jan. 4. Regular drops reportedly continue alongside them.

Undoubtedly one of the breakout hits of the year, "Rocket League" has continuously dropped free updates and content, much to the delight of its million-strong fanbase.

The soccer-meets-racing game is currently available in the PC and PS4. SteamOS and Mac ports were announced earlier this year.

More recently, Psyonix announced the Xbox One version will come out Feb. 2016 although it won't support cross-platform play.

The latest "Rocket League" update is now available, as announced on Twitter.