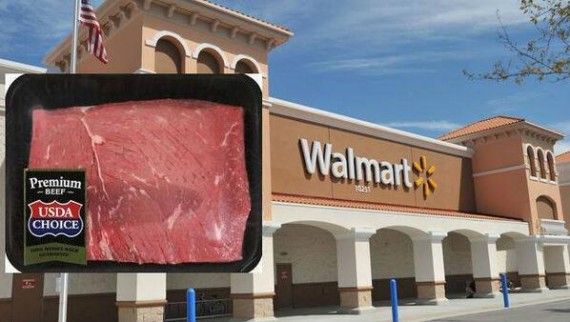 A pregnant woman and her family experienced sickness after eating Wal-Mart steak meat that had LSD. (Photo : Twiiter Photo Section)

Police are looking into the manner LSD got into meat from Wal-Mart and sent a Tampa family of a pregnant woman to the hospital Fox News Latino reported Wednesday.

The streak meat was reportedly bought from a Wal-Mart at 1501 N. Dale Mabry in Tampa Fox News Latino reported.

Ronnie Morales became ill, followed by Jessica Rosado nine months into her pregnancy who was brought to St. Joseph's Women's Hospital Rosado's daughters then began having hallucinations according to Tampa Police Chief Jane Castor Fox News Latino reported. Morales and the daughters were discharged from the hospital Wednesday.

Police, the Florida Department of Agriculture, and Hillsborough County Health Department are on the case Fox News Latino reported.

"Like everyone else in the community, we are deeply disturbed about this situation and we are taking it very seriously. We want answers and we're committed to working with officials to get to the bottom of this," a spokesman for Wal-Mart said in a statement Fox News Latino reported.

The Hillsborough County Medical Examiner's Office unveiled examinations that showed the four-person family ate the meat tainted with the drug.

"We know our customers expect safe, quality food and we require our suppliers to meet the highest of food safety standards. It's unclear where and how the food was tampered with or if the tampering occurred after purchase. However, out of an abundance of caution, we have pulled the remaining product from the store," the spokesperson said in the statement Fox News Latino reported.

"We have been in touch with our supplier and they tell us they have no reports of similar incidents. We are also reviewing our store's surveillance video to see if we can find any information that might assist in the investigation. At this point, we're not aware of any suspicious activity," the spokesperson said in the statement Fox News Latino reported.

The products have been taken off Wal-Mart shelves, and have been sent for examination.