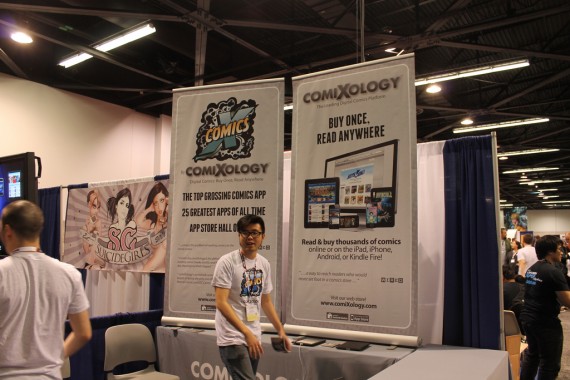 Amazon.com, Inc. announced on Thursday its plans to purchase digital comic book platform Comixology. Amazon has not revealed the cost of the deal.(Photo : Pat Loika)

Amazon has not revealed the cost of the deal, according to CNET. Comixology is considered by many customers and publishers as the main online source for comic books.

The digital comics retailer was founded in 2007 and features comic books and graphic novels produced by over 75 of the top industry publishers as well as independent authors, ZDNet reported.

David Steinberger, co-founder of Comixology, said the availability and variety of books on the company's website is what makes Comixology a good match for Amazon, CNET reported.

"Comixology's mission is to spread the love of comics and graphic novels in all forms," Steinberger said. "There is no better home for Comixology than Amazon to see this vision through."

Comixology's headquarters will stay in New York, and the deal is expected to close by the end of June.

The company currently offers over 50,000 comics for sale, TechCrunch reported. Comixology released a self-publishing platform for comics in 2013, which let comic creators upload and sell their own work. The platform is similar to self-publishing of books offered for authors on Amazon.

The comiXology iOS app was one of the top performing apps at the App Store by grossing sales last year. The app was one of only two non-games in Apple's Top 20 Grossing for 2013.

Comixology has also gained a large fortune from its patented technology for Guided View, in which readers tap the device to move to the next panel while reading a comic, CNET reported. The company's iPad app was in the top 10 in grossing sales in 2010 and 2011, and was the No.1 grossing, non-game app in 2012 and 2013.

Comic books are also available on Amazon's Kindle Fire tablet. Chip Mosher, vice president of communications and marketing for Comixology, said he did not expect there to be any issues between Comixology and Kindle.

"Nothing to announce today, but we expect we'll find ways to make both Comixology and Kindle work better together," Mosher said.