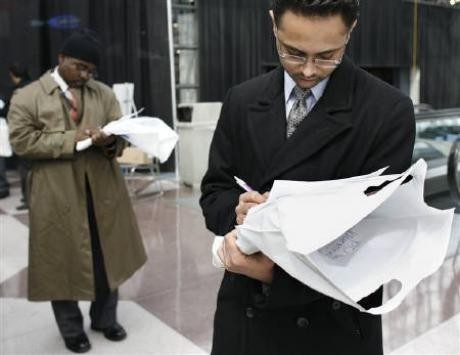 The jobs bill that was passed by the U.S. Congress Thursday to help small businesses with easier credit and tax incentives to create jobs has been blocked by the Senate Republicans on Tuesday following criticism for a loophole that could harm the prospects of small businesses.(Photo : Reuters)

The Orange County Register reported that new employer businesses has fallen 27 percent since 2006, which means that startups, which 10 years ago would have created 4.6 million jobs, are now only creating 2.5 million jobs. Also, 10 years ago, the average new business opened with 7.5 jobs; today it is at 4.9 jobs.

Smart Money said that in 2009, there were 552,600 new businesses created while 721,737 small firms closed or went bankrupt. They went on to report that in 2007, 75 percent of angel funded deals came at the start-up stage, while in the first half of 2011 only 39 percent of companies backed by angels were in the startup phase.

This trend is just one more sign of how hard the recession has been on entrepreneurs. It has not only hurt sales, sending many small businesses under, but it has obstructed the ability to raise money for the next great idea.

So why would anyone in their right mind risk their money and reputation for a one in three chance of being in business after seven years?

This week, Bloomberg Businessweek reported that the Wal-Mart greeter job, which has been around for 30 years, has been removed from the overnight shift of its stores. Obviously they will be using those hours more productively for tasks like stocking shelves, or just eliminating the hours all together. Every generation loses entire job categories -- think milkmen.

So are today's entrepreneurs desperate and opening businesses because they just can't find a job? Let's hope not, because that is almost a guarantee your business will fall into the two out of three fail category.

Clearly you need a good idea, product or service before even thinking about opening up your own business. Assuming one have this great idea, the next set of questions arise: Do you have the traits to run your own business? Incredibly important and necessary traits include the ability to self-start; to not be easily intimidated; adaptability; the joy of competition; the ability to address risk; and the ability to make decisions quickly.

Then you need to overcome the basics of starting a business, like cash flow (make sure you have at least six months of savings to live from), time management, a sound business plan and the ability to wear all the hats yourself.

Reading all these numbers and knowing you don't have the equity now in your house to fund a business, may be one of the most depressing things you do today. But the optimistic glass-half-full American entrepreneur doesn't read these numbers like a normal human being.

They say "I am going to be in the one out of three that succeeds, and I am going to make a lot of money doing it"!  DollarDays.comsalutes these strong-minded entrepreneurs and to celebrate your grit and determination, we are holding a sweepstakes for small businesses on our Facebook page. If you are not currently an entrepreneur or a small business, make sure you nominate a business you know deserves to win.

We are just one small company doing our part to help grow the American dream. The rest of America needs to wake up and bring the small business numbers back to where they were at the beginning of the 21st century.

Supporting small businesses is an American team effort and we need to get those numbers back to where they were, together.

Marc Joseph is the author of "The Secrets of Retailing, Or: How to Beat Wal-Mart!" and the CEO/President and founder of DollarDays International Inc.