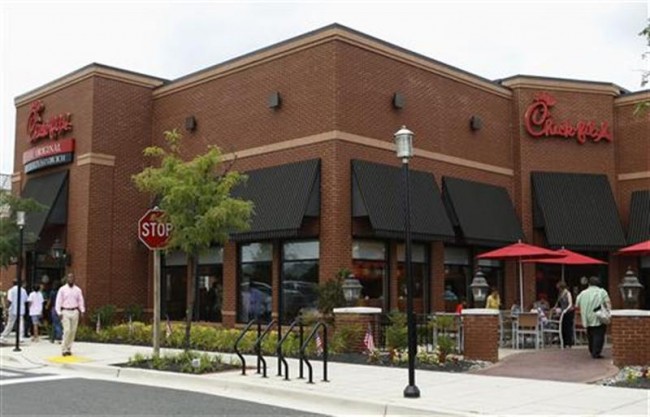 The exterior of a Chick-fil-A restaurant is seen in Silver Spring, Maryland, August 1 2012. REUTERS/Gary Cameron

Following the Chick-fil-A anti-gay marriage controversy that surrounded the fast food chain last month, Chick-fil-A appears to not be slowing down and opened a new west Wichita, Kansas.

More than a hundred people woke up early Wednesday morning to line up outside the store for the chance to get a year's worth of free Chick-fil-A.

All those who showed up Wednesday morning got a number and then a raffle was held to choose 100 people plus ten alternates. Those people have to camp out for 24 hours in order to get their reward, according to KAKE News.

A couple, Toni Kirtley and Rick Nobles, were spotted at the west Wichita grand opening, and according to the report, they have become Chick-fil-A celebrities.

"They actually recognize us, because we're regulars," Nobles said. Wednesday's event is their tenth "First 100" event.

"Wherever there's a Chick-fil-A within a few hours drive, we'll go and visit," Nobles said.

Chick-fil-A recently sparked a pro and anti-gay marriage debate which got many politicians and CEO's involved. The controversy started last month with comments by company president and COO Dan Cathy, suggesting that he opposed gay marriage.

Cathy told a religious publication that the company backed "the biblical definition of a family" and later said: ""I think we are inviting God's judgment on our nation when we shake our fist at him and say, 'We know better than you as to what constitutes a marriage."'

Former GOP presidential hopeful Rick Santorum, Dallas megachurch pastor Robert Jeffress and former Alaska governor and vice presidential candidate Sarah Palin joined in the debate, urging their supporters to give Chick-fil-A their business. Dozens of photos were posted to Twitter on showed Chick-fil-A locations packed with people or lines out the door.

Gay rights activists and backers of same-sex marriage held "kiss-ins" at Chick-fil-A restaurants across the United States on Friday to protest the fast-food chain president's opposition to homosexual unions.