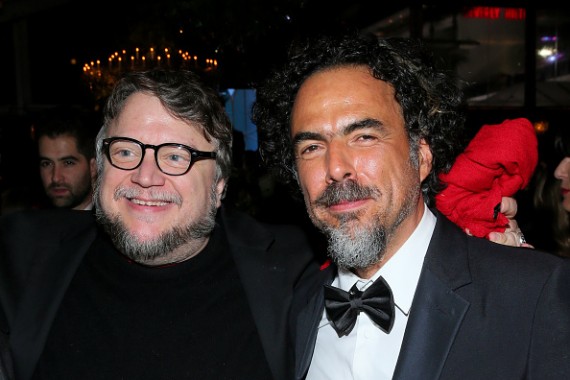 The horror movie depicts how a young author (Mia Wasokowska) discovers the dark secrets of her husband and realizes he is not who he appears to be.

The storyline is set in the 19th century and said to have been filmed in some parts of Northern England. The movie, which stars Mia Wasikowska, Jessica Chastain, Tom Hiddleston, Charlie Hunnam and Jim Beaver, is produced by Del Toro himself, Thomas Tull, Jon Jashni, Callum Greene and executive producer Jillian Share.

In the trailer featured by Coming Soon, the setting of the Guillermo del Toro's "Crimson Peak" generally lies in some snow capped mountains where a sprawling, gothic inspired castle stands tall and haunted.

Torn between loving her childhood friend and the gnawing forces of loving of an outsider, the film revolves around mystery, discovery and haunting pasts that slowly unravel the true identity of each character.

The mystery also spirals after Mia, upon realizing that she's going to live in a haunted house, starts to regret her decision. Slash Film also shed some light on the nature of the horror film where siblings, Hiddleston and Chastain, share some secrets growing inside the castle.

Guillermo Del Toro is also the creator of "The Devil's Backbone," "Hellboy" and "Pan's Labyrinth," in collaboration with Matthew Robbins.

The movie "Crimson Peak," set to be released on Oct. 16, 2015, is the product of two giant production companies, Legendary and Universal Pictures.

According to Variety, Guillermo Del Toro is preparing for the next sequel of "Pacific Rim" and the director and Legendary already announced its release on April 7, 2017.

According to Time, this coming Halloween might be a little scarier through the movie "Crimson Peak" under the expert guidance of Guillermo Del Toro who knows how to ratchet up the tension in his horror movies.