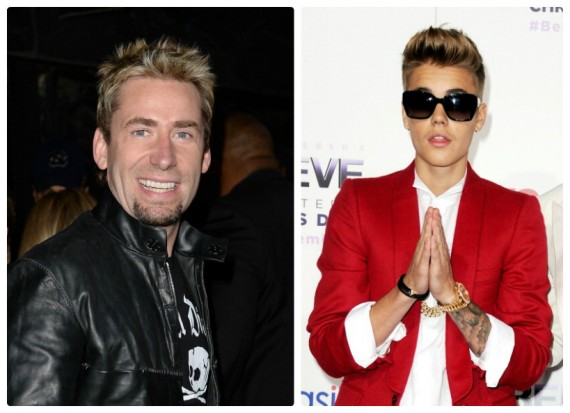 The battle of the Canadians has started as Nickelback's Chad Kroeger dissed Justin Bieber.

During a recent interview with NXFM (via Mail Online), the 40-year old rocker expressed his disappointment on the 20-year old pop star. The "Baby" hitmaker has been involved in many scandals and misdeeds. He was arrested on DUI and drag racing charges in Miami last year as reported by TV Guide.

"I think that he's going to look back at this time in his life and he's going be ashamed of the things that he's done," Kroeger told the radio talk show hosts.

The "Far Away" hitmaker believes that the reason why Bieber became like that was because of having fame at a young age.

"You've got to be careful when you're handing someone that young the keys to the Kingdom," he said. "And when you give someone that young that much money...to do whatever you want to do, things are going to run amok and we're all going to get to stand back and watch the wheels fall off the train," Kroeger explained further.

Justin Bieber was only 16 when he rose to fame for hits such as "One Time," "One Less Lonely Girl" and of course "Baby". The Nickelback frontman was hoping that the young artist will turn out to become one of the greatest musicians today, but unfortunately he didn't.

"I really wanted him to turn into kind of a Justin Timberlake; very funny, very caring, a really good person," he said.

There are many Justin Bieber haters in the world, but we can't deny it that Chad Kroeger's band also has a lot of haters. They were even voted as the second worst band of the nineties by the Rolling Stone.

"It doesn't matter what you do, because the people that are unhappy with their own lives, they just kind of hate everything," Avril Lavinge's husband said.

Despite the negative criticisms, Nickelback has sold more than 50 million albums worldwide and continue to tour the world.

"I make music for myself and for the people that want to hear the kind of music that I make," Chad Kroeger said.

Justin Bieber, on the other hand, apologized for his past mistakes and is now trying to become a better person as reported by ABC News.

"I'm passionate about being better and growing, so I think this is gonna be an awesome chapter in my life and I'm so glad to have you guys supporting me," he said.