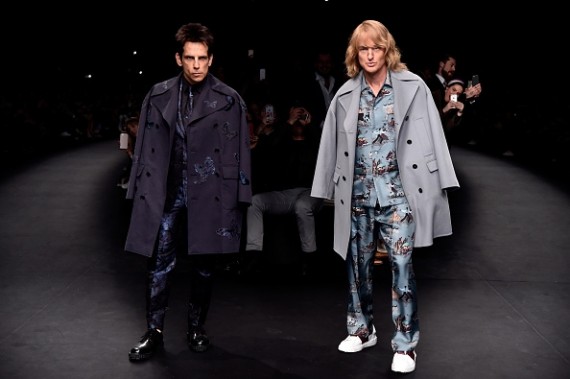 "Zoolander 2" is really happening and the stars of the movie, Ben Stiller (Derek Zoolander) and Owen Wilson (Hansel), recently made their runway debut at the Paris Fashion Week.

The crowd went wild when they saw the two actors walk and strike their trademark blue-steel pose.

The 49-year-old director and the 46-year-old actor also took a selfie video while at the backstage of the fashion event. According to Hollywood Life, the video was taken while the two were preparing for the Valentino fashion show. Vouge's editor-in-chief Anna Wintour knocked at the door to make sure that everything's all set.

"Hi guys, you ready?" she asked Derek and Hansel.

"Totally," Zoolander replied as he continues to pose for the selfie video.

You can check out the other ridiculous backstage scenes in this video posted by Vouge.

Apart from Ben Stiller and Owen Wilson, Will Ferrell will also be returning in "Zoolander 2."

"We are actually supposed to do a read-through of a sequel script soon, and Mugatu is a part of it," the 47-year-old comedian told The Hollywood Reporter.

A new addition to the cast is Penelope Cruz, but her role remains unknown.

Since "Zoolander" focuses on the world of fashion, then fans will most likely see some of the top models and designers make a cameo in the sequel. According to E!Online via (Independent.ie), Karlie Kloss is definitely on board after American model Gigi Hadid turned down the role.

Other models that are reportedly going to make a cameo include Naomi Campbell, Alessandra Ambrosio, Jourdan Dunn, and Cara Delevingne. The alleged former girlfriend of Michelle Rodriguez is most likely to appear in "Zoolander 2" as she posted a photo of herself together with Ben Stiller and Owen Wilson on Instagram.