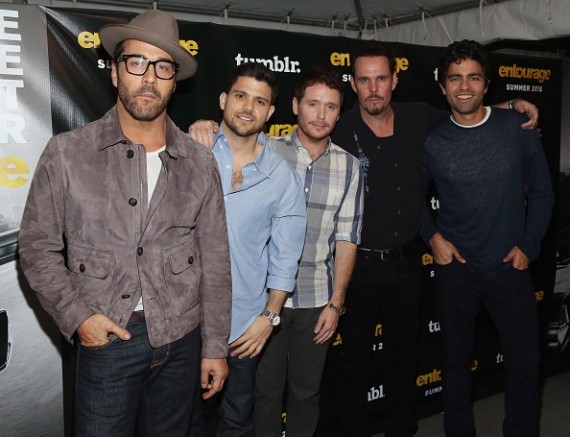 The boys are back and we can see more exciting scenes in the new trailer of "Entourage" movie.

The upcoming film is based on the popular HBO series that focuses on the acting career of Vincent Chase played by Adrian Grenier. He is joined by his brother Johnny Drama (Kevin Dillon) and friends Eric Murphy (Kevin Connolly) and Turtle (Jerry Ferrara) in his adventure and misadventures.

In the movie, Vince finally got a chance to direct his own film together with his manager Ari Gold played by Jeremy Piven. Eric, on the other hand, is expecting a baby with his girlfriend Sloan (Emmanuelle Chriqui). While Turtle tries to get a date with UFC champion Ronda Rousey.

During an interview with E! Online last year, Jeremy Piven teased that there will be many famous celebrities appearing in the movie.

"I think for the people that watch the series and are fans, I think they're going to be really satisfied because everyone's back, and we picked up where we left off, and then we have incredible cameos," he said.

In the "Entourage" new trailer, fans finally got a chance to see some of the biggest names in the movie, music and sporting world. Mark Wahlberg and the official Facebook page of the film shared the second trailer online.

The film's executive producer Mark Wahlberg, who will also be appearing in the movie, is confident that it will be a big hit. In fact, he teased that they are already planning a sequel to it as reported by Slash Film.

"I told Doug [Ellin], 'Let's not wait for the movie to come out to start planning the next one because this is definitely going to be a big success,'" he said. "If I have anything to do with it there will be."

The "Entourage" movie will hit the theaters on June 5. Watch the official trailer below: