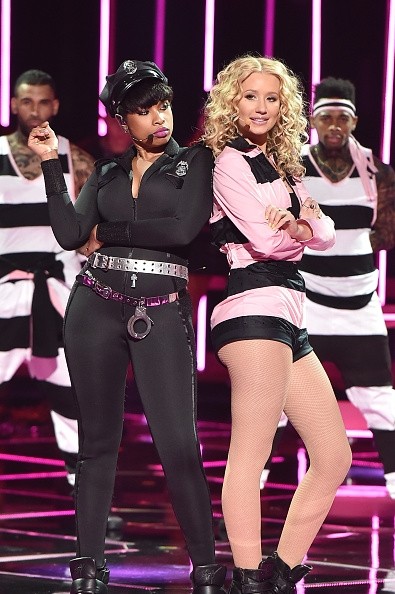 One of the highlights of the recent 2015 iHeartRadio Music Awards was the performance of Iggy Azalea and Jennifer Hudson behind bars - not literally though.

According to E! Online, the awards show kicked off with the duo's convict-themed performance of the song "Trouble."

The American Idol alumna was dressed like a lady cop while the Aussie rapper wore a sexy convict outfit. Hudson and Azalea gave each other a sizzling shakedown behind bars and that got the crowd all excited.

The 24-year-old model and the 33-year-old actress performed the same song at the Kids Choice Awards. Jennifer Hudson wore a cop suit with fishnet tights and handcuffs while Iggy Azalea wore a yellow jumpsuit matched with a pair of black wedge sneakers.

The Sydney-born musician's latest collaboration with "Dreamgirls" star is included in Iggy's album called "Reclassified". It was produced by Salt Wives and Invisible Men. The music video of "Trouble" premiered on Vevo and YouTube on February 27 and it currently has more than 17 million views.

Iggy Azalea and Jennifer Hudson's behind the bars performance at the 2015 iHeartRadio Music Awards was not all about praises. Rolling Stone included it in their list of "Worst Moments" and claimed that it has the worst stage plotting.

Jamie Foxx, who introduced the duo's performance, reportedly delivered the worst joke. According to the magazine, his monologue joke about Bruce Jenner (who is reportedly transitioning from male to female) performing a solo his-and-hers duet caused a lot of controversy and he was even accused of having transphobia.

"I just think it's a low blow," she said as reported by US Weekly. "I think it's very mean, but you know, I wish him all the best. It is what it is."

Iggy Azalea and Jennifer Hudson's performance behind bars at the 2015 iHeartRadio Music Awards is indeed way better than the host's joke that night. Check out the duo perform "Trouble" at awards show below: