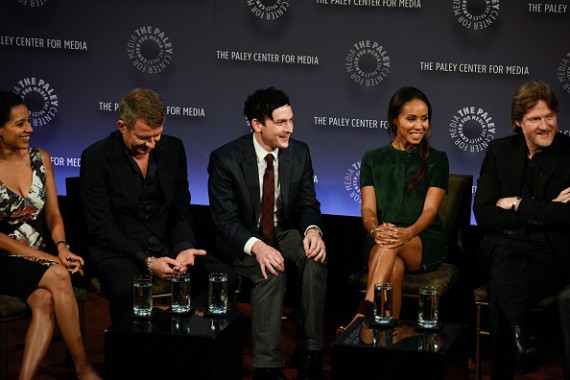 A "Gotham" episode guide for the finale has been released and by just reading through it, looks like fans will be treated to an epic showdown between two villains.

The finale will be aired on May 4 and it will be called "All Happy Families Are Alike." The title has the word family in it but what it will be about are fights and tensions between two major rivalries in the show - Fish Mooney (Jada Pinkett Smith) and Oswald Cobblepot (Robin Lord Taylor) and Leslie Thompkins (Morena Baccarin) and Barbara Gordon (Erin Richards).

Read the full "Gotham" episode guide for the finale below:

"As Gotham City's gang war reaches its boiling point, Fish Mooney goes head-to-head with Maroni and Penguin in an attempt to re-stake her claim on the city. Meanwhile, Barbara and Leslie Thompkins are brought together after recent events, and Bruce searches Wayne Manor for any hints that his father might have left behind in the all-new "All Happy Families Are Alike" Season Finale episode of GOTHAM airing Monday, May 4 (8:00-9:00 ET/PT) on FOX. (GTH-122) (TV-14 D, L, V)"

Before the finale though, fans will have to undergo two more intense episodes (to air on April 20 and 27) featuring the frightening serial killer called Ogre (Milo Ventiglimia).

This new villain was introduced last episode. Ogre is someone who the GCPD would not touch as he also targets the family of the cops who investigate him. Unfortunately for Jim Gordon (Ben McKenzie) he was set up by Commissioner Loeb to have a run in with the serial killer. Although disappointed by what his superior did, Gordon is determined to bring down Ogre.

Read the "Gotham" episode guide for the next two episodes below.

"Gordon and Bullock continue to investigate the Ogre (guest star Milo Ventimiglia), who begins to make his move on someone close to Gordon. Meanwhile, Bruce and Selina team up to expose a corrupt Wayne Enterprises employee and Nygma comes to Kristin Kringle's defense in the all new "Under the Knife" episode of GOTHAM airing Monday, April 20 (8:00-9:00 ET/PT) on FOX. (GTH-120) (TV-14 D, L, V)"

"The Anvil or the Hammer"

"The Ogre breaks down Barbara's emotions, while Gordon and Bullock go to great lengths to track him down. Meanwhile, Penguin leads a massacre, beginning an epic war, while Bruce learns the truth about Wayne Enterprises and Nygma deals with his recent actions in the all new "The Anvil or the Hammer" episode of GOTHAM airing Monday, April 27 (8:00-9:00 ET/PT) on FOX. (GTH-121) (TV-14 D, L, V)"