Donald Trump Is Running For President 2016, Says American Dream Is Dead; Did Hillary Clinton Confirm His Bid Even Before Announcement? 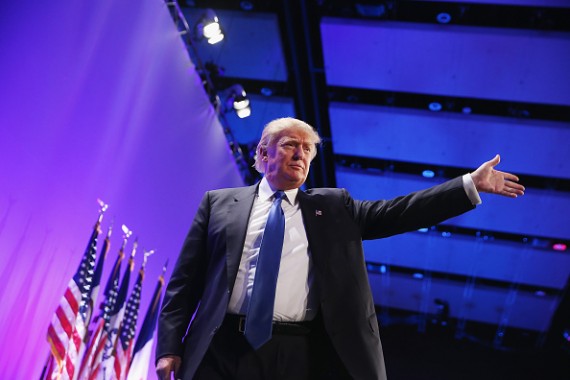 Real estate magnate and businessman Donald Trump just announced his bid for the U.S. presidential post today, and sounded "Messianic" by saying the American dream is dead and that he will "bring it back stronger than ever."

Donald Trump's presidential bid was announced before noontime at the Trump Tower in New York City, with his children and grandchildren reportedly present during the announcement.

His daughter Ivanka Tump took the stage to introduce her father before Donald Trump descended from an escalator with his wife Melania as they faced the crowd, the Daily Mail UK reported.

With his slogan "Make American Great Again," Donald Trump's presidential announcement was made with his future plans, promises, and criticisms of the current administration.

"We need somebody that literally will take this country and make it great again. We can do that," Donald Trump said. "Ladies and gentlemen, I am officially running for president of the United States, and we are going to make our country great again."

The businessman also added he would be the "greatest jobs president God ever created," and that he will bring back the American dream stronger than ever before, which he believed to be dead, the report added.

Donald Trump announced his presidential bid while criticizing the Obamacare particularly and calling it a "disaster."

The real estate magnate is joining the GOP race with fellow Republicans such as Jeb Bush, Marco  Rubio and Rand Paul.

Did a Hillary Clinton team email preempt the announcement?

The official email sent by the campaign team of Hillary Clinton 23 hours ago as of press time, which fell before the official announcements of Donald Trump and another Republican Jeb Bush, said, "Today, another candidate is joining the Republican presidential choir - and they're singing the same old song of failed policies that seem like they're from another country."

The email also contained backlash on the GOP statement quoted as "I am not a scientist," which speaks about climate change policies.

"If you ask many of them about climate change, one of the defining threats of our time, they'll say, "I'm not a scientist" -- and they'll refuse to listen to those who are," the email said.

It is uncertain whether which presidential candidate the email seemed to have preempted because two Republicans reportedly announced their bids hours after the email was sent.