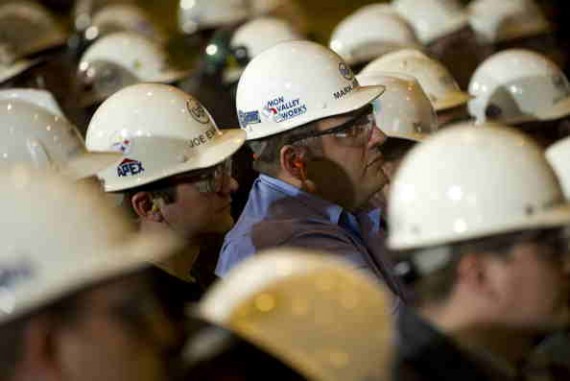 The United Steelworkers (USW) has announced in a press release that the union's bargaining committee has reached a tentative agreement on a new contract with U.S. Steel Corporation that will cover 18,000 workers at more than a dozen facilities.

The tentative agreement is subject to ratification, which would take several weeks to complete, from the members of the 26 local unions.

USW said that U.S. Steel initially demanded for major cuts in pay and benefits, along with changes to work rules and other concessions.

These demands would have cost workers thousands of dollars per year.

"This has been a difficult year and a difficult round of bargaining, but I am proud of the way the brothers and sisters of the USW stood up and demanded fair treatment," Leo W. Gerard, the president of USW International, said.

Tom Conway, the vice president of USW International and the chairman of the bargaining committee, said that the members "were determined not to be made scapegoats."

He said that throughout the process they refused to take the downfall "for the problems of unfair trade and global overcapacity."

USW stated that their negotiations with U.S. Steel for a labor contract began back in June, during a crisis for American steelmakers.

Steelmakers were facing declining oil and gas drilling, as well as illegal, low-priced imports from China and elsewhere.

These issues resulted in overcapacity of steel across the globe, which drove prices and demand down.

U.S. Steel and other companies were forced to idle their plants and lay off workers at factories around the country.

Pittsburgh Business Times reported that U.S. Steel has been hit hard during this crisis.

Mario Longhi, the president and CEO of U.S. Steel, said in a press release issued by the company that they are pleased to reach an agreement in the "best interest of our company, our stakeholders and our employees."

He said that the tentative agreement, which is a three-year contract, will "further support the mutual success" the company has had with the USW in pursuing the "Carnegie Way" and in confronting the crisis facing the industry.

U.S. Steel said that further details of the tentative agreement will be made available once the ratification process is completed.