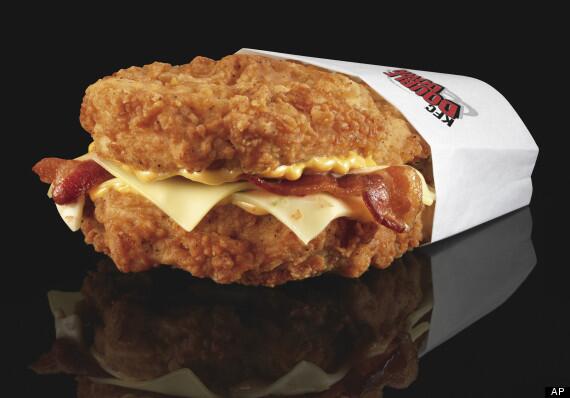 KFC's Double Down sandwich is reportedly coming back to the franchise restaurant chain's menu Monday for a limited time The Huffington Post reported Wednesday.

The appearance is not expected to be permanent however as the company plans to take the sandwich off the menu May 25 for quite some time unless people's response to the food shows a different opinion.

"At this point, we're thinking about this as a limited-time only kind of product," the spokesman said. "We'll have to see what America thinks," a KFC spokesman told The Post.

According to USA Today, KFC is panning out a social media marketing endeavor emphasizing the Double Dare Down.

KFC initially unveiled the sandwich April 12, 2010, and further lengthened its availability time after over 10 million double down sandwiches were sold in what was originally thought to be a temporary promotion USA Today reported.

The sandwiched remained on the menu at some KFC locations throughout 2010 and for some time in 2011 along with gaining a listing as an off the menu item during the time after.

KFC started the year off with a re-launch of the 540 calorie sandwich at locations in the Phillipines USA Today reported.

"We want our markets to be super innovative and disruptive," Christophe Poirier chief marketing officer at KFC International told The Post. In March "When you are not disruptive ... you don't reinvent the game."

"It was clearly U.S.-centric -- we did not have any intention to send it oversea. But, we got the buzz on the web. In fact, there was so much pressure ... the venues were begging to get the Double Down," Poirier told The Post.

The Double Down has chicken patties that are deep-fried, bacon. a couple different kinds of cheese, a sauce dubbed a secret.