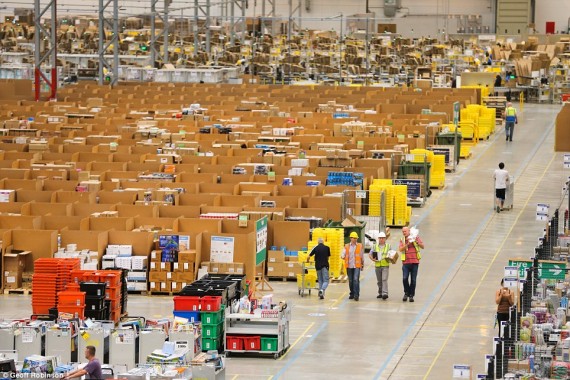 Amazon promises 13,000 seasonal workers 20p an hour more than the minimum wage during the first 3 months of work as it preps up to process millions of orders during the peak Christmas season.

The temporary workers were reported to work 20-hour weeks while most of them would work 40-hour weeks. Those who were looking for permanent work chose the seasonal job instead because of the higher pay.

Back in 2013, temporary workers, which included students and others who want to earn additional income this holiday season were paid 1p an hour over the national minimum wage and majority of them had zero-hour contracts.

The GMB Union expressed their approval of the terms offered by Amazon.

"You can't live on it and it's hugely subsidized by in-work benefits but it's a small step in the right direction," according to Martin Smith, national organizer at GMB in a statement in The Guardian.

The United Kingdom division of Amazon reportedly received 4.1 million items, or about 47 items per second, which were handled by worker located in eight "fulfilment centers."

"Last year, on the busiest day in the run up to Christmas, our customers ordered 4.1 million items-that's about 47 items ordered per second," according to John Tagaawa, director of UK operations at Amazon.

"The thousands of seasonal associated who join us at this time of year play an integral role in helping us deliver an exceptional experience for our customers during this incredibly busy time," Tagawa added.

The company reported that they previously hired 1,000 permanent staff during the course of the past two years and planned to add 1,000 more over the next few months.