Walmart Focuses on Food Safety to Boost Sales in China 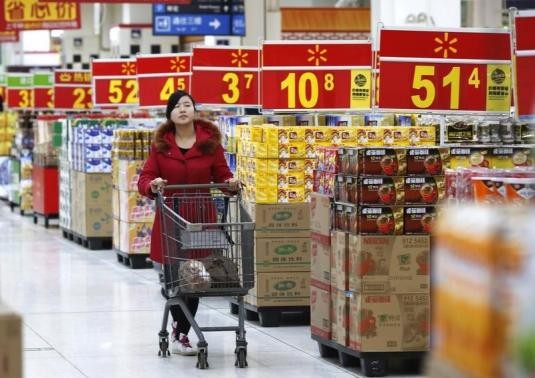 A customer shops at a Walmart store in Beijing, China(Photo : Reuters)

Walmart, currently has 400 stores in China will direct its attention on food safety in China in an attempt to make a comeback after flailing sales and food safety concerns in the past.

"We play an important role in China delivering food safety and quality products to our customers," said Scott Price, Wal-Mart Asia chief executive in a statement in Reuters during the Asia Pacific Economic Cooperation (APEC) CEO Summit held from Nov. 8 to 10.

The Chinese government has imposed a fine of almost $9.8 million on Walmart for selling sub-par products and misleading pricing.

Walmart was criticized back in January 2011 after its donkey meat product were found to be containing fox meat, causing the world's largest retailer to close down its stores in Chongqing, China.

The incident spawned several accusations that Walmart is selling non-organic pork and expired duck meat at a higher price by labelling it as organic.

In an effort to turnaround from the incident, Walmart said it plans to conduct DNA tests in its products, as well as put up efforts to improve safety of its food.

The food testers at Wal-Mart distribution centers in China inspect more than 600 products daily to ensure that the best are sent out to the various stores in the country, according to Wall Street Journal.

"The 'fresh' experience is an area where we can differentiate. We are the only retailer in China that has 100 percent of our 'fresh' going through distribution centers," said Price, adding that China plays a significant role in Wal-Mart's future expansion plan.

Meanwhile, the company points it fingers towards the rules China imposes on retailers, saying that the Chinese government is "biased," investigating on foreign multinational brands than Chinese retailers.

Christian Murck, former president of the American Chamber of Commerce in Beijing, agree with the authorities at Wal-Mart.

"When the Chinese government wants to make a point on food safety, they go after a multinational rather than a Chinese company," said Murck.