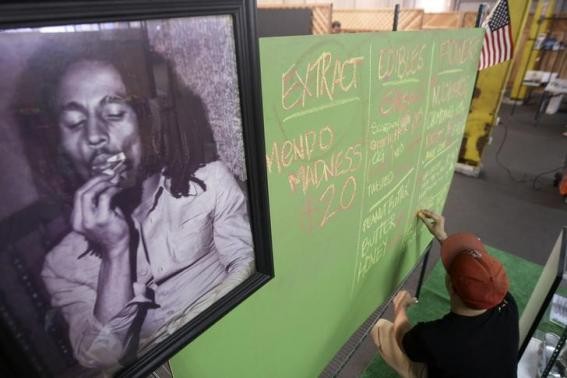 A portrait of reggae legend Bob Marley hangs next to a menu of marijuana products at the medical marijuana farmers market at the California Heritage Market in Los Angeles, California(Photo : Reuters)

With more states legalizing the use Marijuana in the U.S., Privateer Holdings Inc., seizing the opportunity of investing in a "high-risk, high-reward" business, embarked on  creating Marijuana based products inspired by the Reggae legend Bob Marley.

"It's no longer a subculture or countercultural thing," Privateer co-founder and Chief Executive Officer Brendan Kennedy said in an interview. "Part of ending prohibition is by creating brands that fuel change."

Marley, known for helping in making Jamaican music known to the world with hits like "No Woman, No Cry", and "I Shot the Sheriff," died of cancer in 1981 at the age of 36.

"He viewed the herb as something spiritual that could awaken our well-being, deepen our reflection, connect us to nature and liberate our creativity," Cedella Marley, Bob's daughter, said in a statement announcing the deal.

Privateer's Bob Marley-branded products, called Marley Natural, will go on sale in late 2015. Kennedy said the label includes some of Marley's favorite marijuana strains that he might have smoked in his homeland Jamaica, such as pineapple skunk and chocolope, as well as vaporizers, concentrates, oils and hemp-infused lotions.

The Seattle-based company was founded by Kennedy along with two other friends back in 2010 after months-long research in the Cannabis industry. The company has alreadyninvested $22 million in capital and is yet to raise another $50 million.

"Our investors are in this for the long haul," the 42-year old shared.

"They're looking for venture-capital-style returns of 10 to 20 times their investment."

The Marijuana industry in the United States contributes as much as $50 billion annually, and Privateer isn't one to back down on that "massive opportunity,"

Several states in the U.S. including Alaska, Oregon, District of Columbia, followed suit after Colorado and Washington legalized recreational pot in Nov. 4. However, medical use of the drug is stil prohibited in 23 other states.

While Marijuana is slowly gaining acceptance in the U.S., there are stil those who oppose the use of the drug, including the American Lung Association, claiming that marijuana smoke contains a greater amount of carcinogens than tobacco smoke and is associated with adverse physical effects as well as mental, emotional and behavioral changes.

Furthermore, A study released last week in the Proceedings of the National Academy of Sciences showed that heavy marijuana users had different brain shapes and lower IQs than nonsmokers