Wal-Mart and Burger King have showed improved scores in terms of treating LGBT employees, making it closer to companies such as Goldman Sachs and Apple, according to a study done by the Human Rights Campaign.

The world's largest retailer scored 90 out of 100, up from 80 last year in HRC's 2015 Corporate Equality Index which puts into consideration if they are treating employees belonging to the lesbian, gay, bisexual and transgender (LGBT) group as equals and if they have laws against social discrimination.

"We are committed to fostering an inclusive work environment for our more than 2 million associates around the world," Kevin Gardner, a spokesman for Bentonville, Arkansas- based Wal-Mart, said in an e-mail.

Goldman Sachs, Starbucks and Apple scored a perfect 100 this year. Apple CEO Tim Cook announced he was gay last month in a Businessweek essay, which garnered praises among the LGBT community. Apple scored 100 13 years in a row, along with Nike and JP Morgan.

However, Cook revealed that he "is one of the lucky ones." As Apple's CEO, he was fortunate "to work in a company that knows it can only flourish when you embrace people's differences." 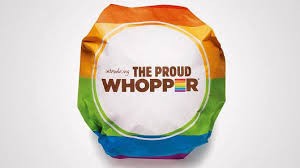 (Photo : Facebook)
Burger King Proud WHOPPER: " We Are All The Same Inside"

Burger King jumped from 55 last year to 80 this year primarily because of their "Proud Whopper" campaign, which included putting its signature burger in a rainbow wrapper at a location in San Francisco this year, said Deena Fidas, the director of HRC's workplace equality program.

A stigma against homosexuality in the workplace is still very present, as proven by the absence of federal laws which aim to protect employees from discrimination. Furthermore, there are still 29 states where an employee can still be fired for being gay, which leaves over 50 percent of total workers vulnerable to employment discrimination, all because of the stigma created against homosexuality.

Most of the Americans, however, sang in chorus agreeing that the practice of firing a gay employee is "terrible." Moreover, 69 percent of the respondents stated that they believe it was illegal to fire people just because of their sexual orientation.

Meanwhile, the U.S. government has put out efforts to address the issue on homosexuality in the workplace. President Barack Obama previously issued an executive order last July that prevented discrimination based on sexual orientation against all federal employees, which greatly improved the working conditions of nearly 3 million people working for the federal government.