Michelin Introduces Airless Radial Tires, ‘Tweel’ But Not Made Available to the Public Yet 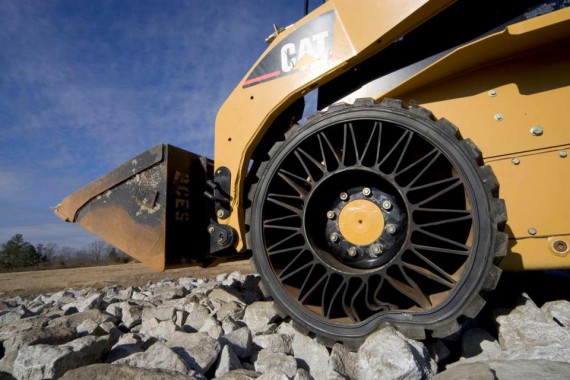 It's every car-owner's dream to avoid a flat tire. So when Michelin launched an innovative design of the tire with no air inside that they claim "virtually prevents flat tires," car-owners were pleased. However, that technology won't be available to passenger cars just yet, according to the president of Michelin itself.

Tweel is only available to front-end loaders and commercial lawnmowers as well as for all-terrain vehicles-vehicles that are more prone to flat tires than passenger cars.

These vehicles get an average of one flat tire once a week, while passenger card have flat tires once every 70,000 miles.

Michelin invented the air-filled tire back in 1946 and is still perfecting its design as of the moment and still continue to recommend it to passenger cars.

However, Selleck pointed out that Tweel is a "real game-changer" in the transport industry and will put their old and new technologies together "and the best technology will win."

Engineers at Michelin foresee Tweel's use in "developing countries where bas roads dictate slow-moving passenger cars." "And that can lead the way to broader passenger car applications," he said.

Michelin says the tire/wheel combination retains some benefits of an inflated radial tire, such as improved traction and longer wear, but never goes flat since it doesn't need air.

Michelin is still trying to conquer obstacles in trying to bring Tweel to the mass market, including developing a cost-effective way to manufacture the product and complying with safety regulations especially made for air-filled tires, according to Joshua Summers, an engineering professor at Clemson University who researched on the Tweel.

It will take more time before the Tweel is universally adapted by car-owners, Summers said.

"I think fundamentally it is a better mousetrap, and I believe we will see a shift, but it will be a long-term shift," he said.