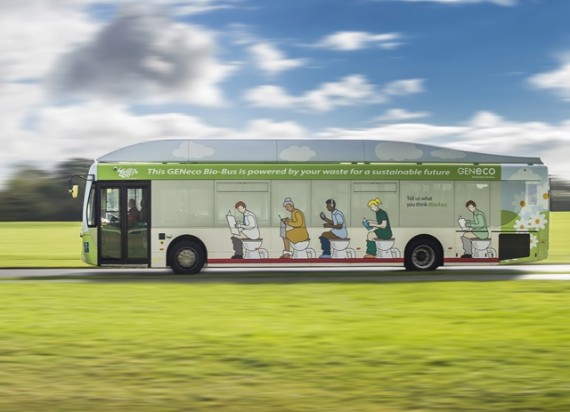 Bath, Britain is moving towards a greener future with the creation of the "Bio Bus," a commercial passenger bus powered by biomethane gas produced from the excrement of people.

The Bio Bus seats 40 people and runs on gas generated through the treatment of food and human waste, roughly the amount of waste excreted by five people in a year, CBS reports.

The Bio Bus produces 30 percent lower emissions than regular diesel engines, and boasts of travelling up to 300 kilometers on only one tank of gas.

"The cost of processing the waste does not affect GENeco as they would treat the waste at the sewage treatment works anyway."

The biomethane gas is made at Bristol sewage treatment plant run by GENeco, a subsidiary of Wessex Water, Seychelles News reports.

The plant converts the waste into usable gas through a process known as anaerobic digestion, where oxygen-starved bacteria breaks down biodegradable material.

In addition to fueling the Bio-Bus, this output is also being supplied to the national gas network. GENeco, the company that runs the Bristol plant, said it is capable of powering almost 8,500 homes.

"Gas-powered vehicles have an important role to play in improving air quality in UK cities, but the Bio-Bus goes further than that and is actually powered by people living in the local area, including quite possibly those on the bus itself," GENeco general manager Mohammed Saddiq.

George Keast, media and PR officer at Wessex Water said that the GENeco sewage treatment plant was the brainchild of thorough research about "gas-to-grid" network in order to power the Bio Bus.

The Bio Bus have opened new opportunities about using renewable energy in Britan, as Keast said that their food waste customers are now considering to use biomethane in their services.

"While we currently have no plans to make another bus, we have had some of our food waste customers talk to us about potentially running their tankers on biomethane," he said.