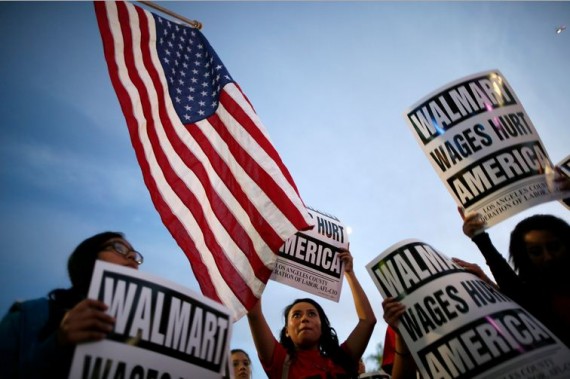 Employees at a Walmart store in Oklahoma were allowed to hold a food drive for their fellow co-workers "in need," sparking debate over low wages yet again.

The Walmart employees put up green plastic bin with a message,"3430 canned food drive. Let's succeed by donating to associates in need!!! Thanks for your support!" the sign on the box read. The number "3430" refers to the supercentre store in Oklahoma City.

The image was posted on Thursday, Nov. 20 on the Facebook page of a labor group named "Making Change at Walmart" by an employee from the same Walmart store who wishes to remain anonymous for fear that he/she might lose his/her job.

"Rather than agree to pay a decent wage or provide full-time hours, Walmart and its owners [the Waltons] continue to earn massive profits while too many of the workers who make the company a success go hungry," the labor group commented.

The food drive was the idea of 19-year old WalMart associate Dawne Sulaitis.

When Business Insider asked about the food drive, they were directed to Sulaitis and she said, "Theres a need in the store - we have couple of associates that are on a [leave of absense] and down to one income right now, so I asked if we could start a food drive to help these associates," she said in a phone interview.

Sulaitis also shared that the store has also had several fund raisers in the past including coat drives and bake sales for a local homeless shelter.

Last year, a Cleveland Walmart was criticized for holding a similar food drive to help employees pay for Thanksgiving dinner, sparking a debate about the necessity of paying workers a living wage.  Critics argued that if Walmart's employees need help paying for food, then the company is giving them low wages.

The average hourly wage for Wal-Mart's full and part-time employees is $11.83, according to the company.

When the Cleveland Plain Dealer, which broke the story, asked Walmart customer Norma Mills what she thought of the food drive, she said, "That Walmart would have the audacity to ask low-wage workers to donate food to other low-wage workers -- to me, it is a moral outrage."

Walmart has long been bombarded with controversy from Labor activists saying that the retail giant reportedly is the "country's largest single employer of low-wage workers," according to Huffington Post.

The retail giant has reportedly been giving its employees meager wages and has created a confusing time scheduling that makes it hard for them to plan for non-work part of their lives including planning for childcare, doctor's appointments and other organizations.

However, according to a report by Huffington Post, while Walmart's employees are struggling to get by, Alice Walton and the Walton family, who could have easily decided to increase their employees' wages, are living in an extravagant $25 million apartment.