Orlando Bloom And Miranda Kerr Are Back Together? Selena Gomez Felt Betrayed By The ‘LOTR’ Star? ‘He Made It Look Like He Didn’t See Her’ 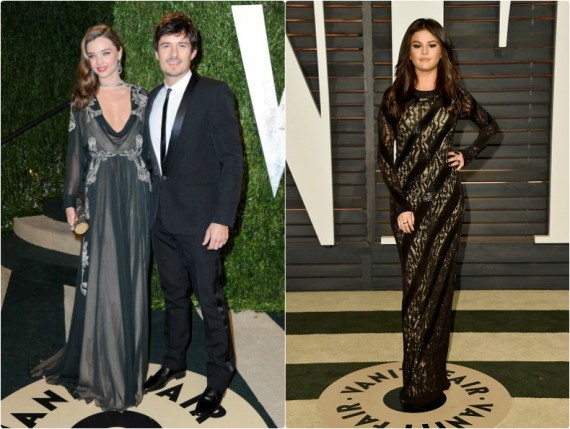 Orlando Bloom and Miranda Kerr were reportedly seen leaving the Oscars after party together and there seems to be one person who was greatly affected by their reunion - and that is Selena Gomez.

Their reunion started out rumors that they are getting back together. Some people were happy about that news because they have a child together, but the 22-year old singer was reportedly upset by what she saw.

According to Hollywood Life, the "Come & Get It" hitmaker was surprised to see the 38-year old actor and the 31-year old model at the Vanity Fair bash in Los Angeles. Orlando Bloom got linked to Selena Gomez last year when they were seen flying on the same plane and staying in the same hotel for We Day in Vancouver. However, the "LOTR" star claims that they are just attending the event together as reported by Perez Hilton.

The two were again seen attending the Chelsea Handler comedy show in Los Angeles but again the actor denied that there is a relationship between them.

Orlando Bloom and Selena's ex-boyfriend Justin Bieber had been in a feud because of his alleged flirting with his former wife Miranda. The British heartthrob even threw a punch at the Canadian pop star in Ibiza. You can check out the video here from TMZ.

Just when everything's going smooth for Selena Gomez now that Zedd has entered into her life, her past seemed to have haunted her during the Oscars after party.

"Selena had a range of emotions bumping into Miranda - it was like seeing a ghost," a source told Hollywood Life.

"The party was big enough for them to avoid each other and time things out accordingly so weird and uncomfortable run-ins would be avoided, but in this case, wires got crossed and Miranda had to pass Selena."

Adding, "And they definitely saw each other. And it wasn't fun."

The website reported that the "I Want You To Know" hitmaker was upset because Orlando Bloom keeps on telling her not to go back with Justin Bieber and now he is back with Miranda Kerr. What's worse is that he pretended that he didn't see Selena Gomez and even avoided her.

"It was like a big 'FU' after a very fun night," their source said.