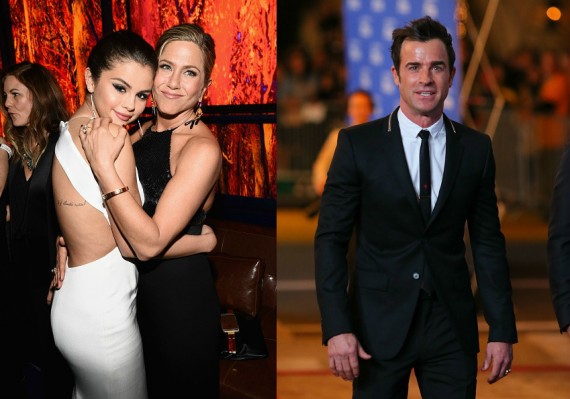 It was previously reported that Jennifer Aniston and Justin Theroux's wedding are in trouble because of her alleged flirting with other men.

The 46-year-old actress was caught hanging out with Eddie Redmayne.

"He smothers Jen with compliments and she laps up the attention. She says his accent and boyish charm are irresistible," an insider told The National Enquirer.

It looks like the tables have turned because the 43-year-old actor is now the one spotted flirting with another woman. According to Celeb Dirty Laundry, the couple is already making plans for their wedding, which is allegedly due this year. Unfortunately, all their efforts and hard work will go to waste because of a third party.

The National Enquirer revealed that Justin Theroux has a crush on Selena Gomez and he was even caught making a move on the singer at the Oscars Party hosted by Vanity Fair. Jennifer Aniston was shocked and was also embarrassed by what his fiance did to the 22-year-old actress.

"Jen was in a booth showing her friend Amy Adams pictures on her phone of floral and seating arrangements for the wedding, when she looked up she saw Justin trying to dirty dance with Selena," an insider revealed. "Jen thought Justin was making a fool of himself by hanging on a girl young enough to be his daughter. Plus he was breakdancing and flailing all over the floor trying to impress Selena."

Aside from dirty dancing and flirting, "The Leftovers" star allegedly kissed the "I Want You To Know" hitmaker during that night. The website reported that the "Cake" actress tried to talk some sense on her fiance.

"Jen told him to get over his creepy old man crush on Selena. Jen knows Justin is a flirt, but she thinks that he has really crossed a line with Selena."

According to Gossip Cop, the Selena Gomez flirting at the Oscars party isn't true, which means that Jennifer Aniston and Justin Theroux's wedding was never cancelled.