Taylor Swift Caught Kissing Her Rumored Boyfriend Calvin Harris! Is The DJ Ready To Get Serious With The ‘Blank Space’ Singer? 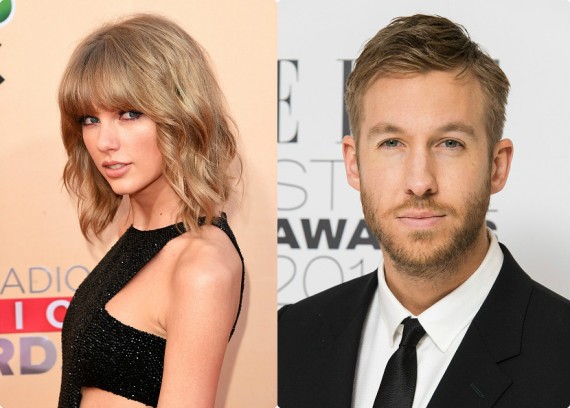 There have been rumors that Taylor Swift's new boyfriend is Calvin Harris and recent photos can confirm that there really is something between the two musicians.

There were reports a few weeks ago that the 25-year-old singer and the 31-year-old DJ started showing PDAs during the BRIT Awards VIP Party.

"They went from holding hands, to dancing and finally segued into some very romantic touching," an insider revealed to Heat Magazine. Their source shared more juicy details about the rumored couple's PDAs. "The two couldn't keep their eyes off one another. Soon after, Taylor flaunted her sexy moves to '99 Problems' by Jay Z as Calvin's hand drifted from the singer's shoulders to her backside," the insider added.

Just recently, Taylor Swift and her rumored boyfriend Calvin Harris were again caught getting cozy at the concert of Kenney Chesney in Nashville.

TMZ shared the PDA photos of the "Blank Space" hitmaker and the EDM superstar during the concert. She was the country singer's special guest that night and the record producer was there to show his support for her.

Concert-goers were able to snap some pictures of Taylor and Calvin holding hands. The songstress was also seen sitting on his lap and there were photos that showed the DJ having his arm around her waist.

After her performance, she allegedly went straight to her rumored boyfriend who was waiting for her at the crowd. According to eyewitnesses, the two even kissed that night.

The photos may have been enough to make people believe that Taylor Swift and Calvin Harris are either officially dating or hooking up. Adam Richard Wiles (real name of the DJ) has a reputation of being a playboy because he has been linked with several women. However, new reports revealed that he is ready to change for the "Shake it Off" singer.

"There's no doubt that Calvin has always had a long stream of female admirers," a source told Hollywood Life. "He's also been a bit of a player in the past - but he wants to do the right thing by Taylor." According to the website, Harris admitted that he wasn't into the blonde beauty last year.

"She looks lovely but she's the opposite of my type," he confessed. I guess he suddenly changed his mind when he got to know Taylor better.