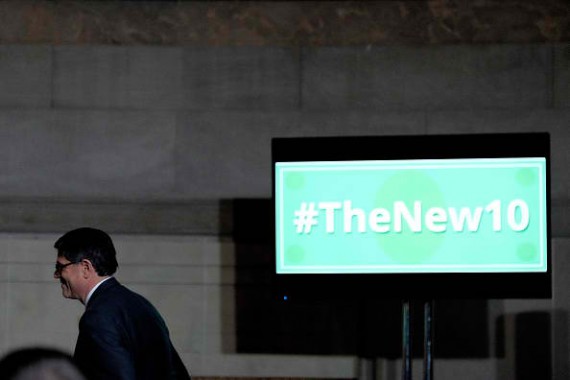 Former US Federal Reserve Chairman Ben Bernanke said Alexander Hamilton deserves to keep the $10 dollar bill for himself given his role in helping establish the country and contributing to the economic legacy of the United States.

On his blog, Bernanke is instead pushing to have the $20 changed instead, arguing that it is better to drop Andrew Jackson from the currency.

"As many have pointed out, a better solution is available: Replace Andrew Jackson, a man of many unattractive qualities and a poor president, on the twenty dollar bill. Given his views on central banking, Jackson would probably be fine with having his image dropped from a Federal Reserve note,"

Treasury Secretary Jack Lew said last week that plans are underway to change the $10 dollar bill, with a woman to grace the greenback for the first time in more than a century. The decision on who will join Hamilton will be made at the end of the year and Lew invited the public to weigh in on the matter.

Bernanke certainly did, raising several points why Hamilton should remain alone on the $10 dollar bill.

"Hamilton played a leading role in creating U.S. monetary and financial institutions. He founded the nation's first major bank, the Bank of New York.... Hamilton's 1791 Report on the Mint set the basis for U.S. currency arrangements, which makes his demotion from the ten dollar bill all the more ironic.... Hamilton also oversaw the chartering in 1791 of the First Bank of the United States, which was to serve as a central bank and would be a precursor of the Federal Reserve System," he said.

The former Fed chair, however, made it clear that he supports putting a woman on the greenback saying it is a fine idea. This won't be happening immediately as the redesigned bill will only be circulated in 2020, the centennial of the passage of the 19th amendment which gave women the right to vote.