US Consumer Sentiment Best in Five Months, Spending to Rise 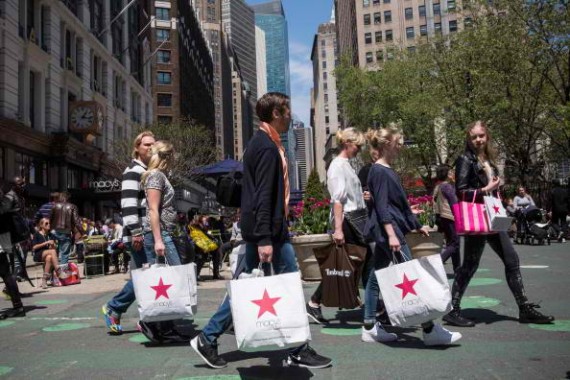 With the string of positive reports on the economy, American consumer sentiment in June rose to its highest level in five-month, indicating that people will be spending more this year.

A University of Michigan survey released on Friday showed that consumer sentiment index rose by 6 percent to  96.1 percent in June from May. The rose index 16.5 percent from the previous year, the biggest jump since 2004.

Consumers were asked to evaluate prospects for the national economy, their personal finances, and buying conditions for the survey. Most had a favorable perception on these topics.

In a press release on its website, Richard Curtin, the chief economist for the University of Michigan survey, said the improving sentiment is due to the positive economic climate and lower expectations .

"An improving economy was the most important component. But the gains were so outsized that they probably reflected the acceptance of a new lower comparison standard that was based on diminished expectations for long-term economic prospects," he said.

The press release added that the positive sentiment indicates a 3 percent boost in consumer spending, which will be the driving force of economic growth for 2015. This is in line with recent data from the U.S. Department of Commerce that showed consumer spending in the first quarter is up by 2.1 percent.

The results continue the recent trend of positive economic indicators for the economy.

In May, new home sales grew by 2.2 percent while the takeup of existing houses rose by 5.1 percent with first-time buyers entering the market.  On the labor front, 280,000 jobs were added in May, the largest since the end of 2014, while wages also rose in the first quarter as more people were hired.

Earlier this week, rhe Commerce department also revised its first quarter economic growth figures, showing that it did not contract as much as first reported.