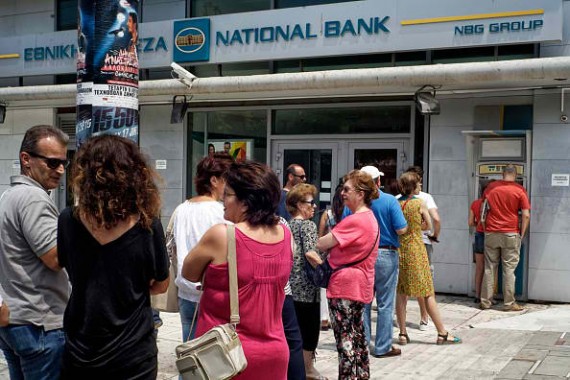 Greece closed its banks and imposed capital controls, with the government and its creditors unable to agree on a deal for continued support for the country's financial system in exchange for harsher reforms.

Greek Prime Minister Alex Tsipras announced late Sunday a week-long bank holiday and ceiling to ATM withdrawals after the European Central Bank decided it would no longer extend emergency loans to Greek lenders after five months of doing so.

With the announcements, Greeks were limited to 60 euro withdrawals per day, as bank deposits plummeted to an 11-year low. The government has also put a cap on the amount of euros that may be taken out of the country.

This follows Tsipras unexpected move  on Friday to declare a referendum for the Greeks to vote on accepting further austerity measures demanded by its creditors or reject these, which would lead to a default and exclusion from the euro zone.  The government was being called to further cut pension payments and raise taxes even as the country us facing a deep economic crises wherein almost one in four Greeks is jobless. If no deal comes, Greece would not be able to pay its $1.5 billion loan from the IMF.

Tsipras was defiant in making the announcement saying the ECB and the Eurogroup will not succeed in blackmailing the Greeks into holding a democratic process. Tsipras urged his countrymen to remain patient and assured them their deposits are safe.

Reuters, however, reported that lines formed outside ATMS and petrol stations to stock up on those resources, on fears that those would run out. The news wire described the Greek reaction to Tsipras's announcement as a mixture of disbelief and fear.

Officials in the European Union and the United States reportedly were working overtime to salvage a deal acceptable to all as a Greek exit is expected to have far reaching repercussions.

The Wall Street Journal reported that stock markets around the world came crashing following the developments in Greece. The Stoxx Europe dropped by 2.4%, erasing gains caused by optimism that a deal will come. The Shanghai Composite Index tumbled by 3.3%, adding to the market's concerns, despite a rate cut by the central bank.