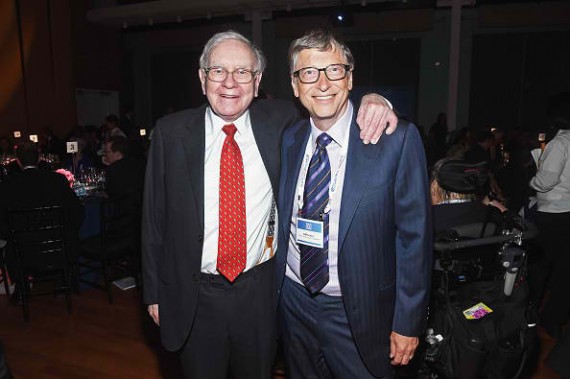 Warren Buffett, the second richest man in the world and among the greatest investors, donated on Monday $2.8 billion worth of Berkshire Hathaway stocks to five charities, continuing his tradition of philanthropy for the 10th straight year.

A Berkshire Hathaway statement named the charities that will be receiving the donations, which will come in in the form of 20.6 million Class B shares .

"This is the tenth annual gift of Mr. Buffett to the Bill and Melinda Gates, Susan Thompson Buffett, Sherwood, Howard G. Buffett and NoVo Foundations. The shares had a value of more than $2.8 billion at last Thursday's close and under the terms of the gift must be spent currently for operations and not added to endowment funds," the statement said.

The first foundation is headed by Microsfot founder and world's richest man Bill Gates and his wife Melinda. The foundation, founded in 2000, supports programs for healthcare, poverty alleviation, education and information technology. Bloomberg estimated that Buffett's total donations to the Bill & Melinda Gates Foundation as of last year were worth $15 billion.

The 84-year old Buffett is the CEO of holding firm Berkshire Hathaway, the fourth largest company in the U.S. with a market capitalization of $160 billion. He made a pledge in 2007 to donate nearly all his wealth to foundations through annual donations of Berkshire Hathaway stocks.

Forbes estimates that Buffett, known as the Oracle of Omaha for his unmatched success in investing, has a net worth of $67.2 billion, second only to Gates's $80 billion. In 2010, the two started the Giving Pledge campaign, which seeks to encourage the world's richest people to donate majority of their wealth to charity.

Buffett elaborated on his philanthropic decision on the Giving Pledge website, saying that donating 99% of his wealth will still allow him to live a comfortable life.

"This pledge will leave my lifestyle untouched and that of my children as well. They have already received significant sums for their personal use and will receive more in the future. They live comfortable and productive lives. And I will continue to live in a manner that gives me everything that I could possibly want in life," he said.