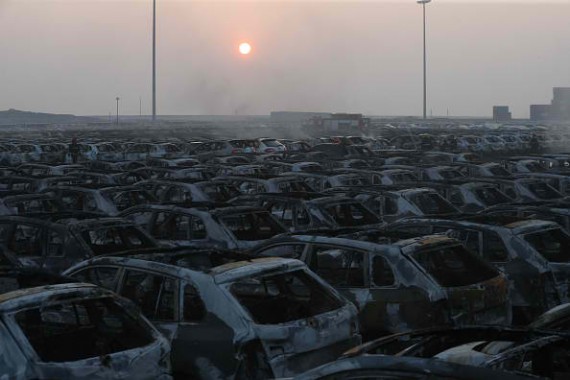 Foreign companies around the Tianjin port damaged by a massive blast last week are holding off restarting their operations as officials continue to investigate the cause of the explosions.

The Associated Press reported that Japanese car maker Toyota has temporarily closed three production lines in Tianjin, where more than half of its China production comes from. Bloomberg reported that 50 Toyota employees living nearby were injured.

A Korean carmaker was also reported to have shut down a logistics center, while other automobile companies such as Volkswagen and Renault said a number of their vehicles were destroyed. The Associated Press said the operations of Panasonic and logistics company Singamas Container Holdings Inc. were also affected.

Other companies such as French aircraft maker Airbus and U.S. farm equipment maker Deere & Co. were also reported to have suspended operations in the area.

The Associated Press said the explosion highlights the challenges of foreign companies  doing business in China, where the safety standards and emergency preparedness still need much improvement even as the government is able to invest heavily in infrastructure.

The report noted that Tianjin becoming home to a number of foreign companies is proof that the government has been successful in developing China's northeast to attract foreign companies to new free trade zones as a counterweight to other economic hubs.  However, the report said the accident, which killed 114, injured hundreds, and with 70 people still missing as of Monday, may make foreign executives reconsider moving to the country due to possible risks to their families.

Bloomberg said the Japanese carmakers avoided higher production losses from the accident since operations were closed for a holiday. But Toyota has the most to lose if production is suspended indefinitely since about half of its production comes from the facility in Tianjin.

The Associated Press reported that business activity in the Tianjin port has somehow normalized. The Tianjin Maritime Bureau said on Monday that port traffic is now normal, while commodity and energy industry tracker said oil and petrochemical taker traffic at the port has bounced back.