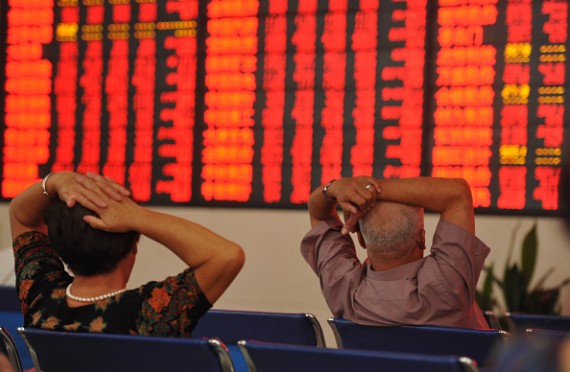 Markets across the world swooned on Monday after the sharp fall of China's stock market combined with the slide of the U.S. dollar spooked investors across the globe to selling their holdings.

Reuters said China's shares retreated by almost 9 percent after the central bank did not implement an expected cut in reserve ratios to support the stock market after its 11 percent slide last week.The dollar also weakened as the market has become uncertain whether the Federal Reserve will push through in September with its first rate hike in nearly a decade.

Reuters said the twin events sent European stocks crashing by 5 percent, with Wall Street expected to suffer similar losses. Bloomberg reported that emerging markets were likewise battered by shockwaves from China's fall as equities in Vietnam, India, the Philippines and Poland all came tumbling down.

Reuters added that the jitters on China's economy also dragged down the price of oil by 4 percent on concerns that the demand from the resource-hungry country will weaken amid an oversupply. It added that metal prices also took a beating with copper, a proxy for global industrial demand, down 2.5 percent, while nickel slid 6 percent to its lowest since 2009.

Bloomberg said the drop of China's stock market was the worst since 2007. It noted that the fall came even as the government announced over the weekend that pension funds will be allowed to invest in the stock market. The report added that from its peak in June 12, the Shanghai Composite Index has shed 38 percent of its value, which is equivalent to more than $4 trillion.

While investors were reportedly disappointed with the lack of government support for the stock market, Bloomberg pointed out that the government has indeed implemented a raft of measures to prop shares such as unleashing $400 billion for investment in equities, banning selling by major shareholders and telling state-owned companies to buy stocks.