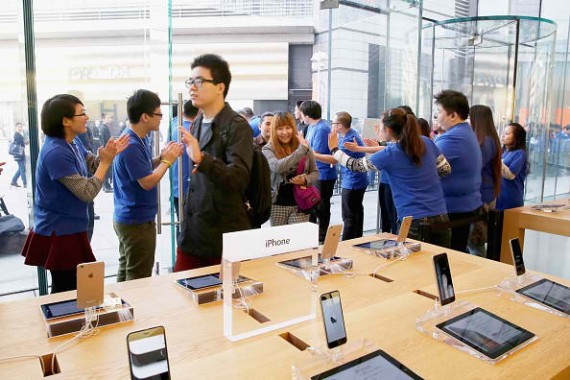 Apple Inc. Chief Executive Tim Cook gave a rare mid-quarter update on its business performance in China, saying sales there strongly grew in July and August to assure investors that the company has not been affected by the slowing economy there.

In an emailed statement to CNBC, Cook acknowledged that the company does not give mid-quarter updates and rarely comments on the movement of Apple stock but has to make an exemption given the developments in China.

Cook told the network's Jim Cramer that Apple's business in China is growing healthily for the past two months.

"Growth in iPhone activations has actually accelerated over the past few weeks, and we have had the best performance of the year for the App Store in China during the last 2 weeks," he was quoted saying in the report.

Reuters noted that investors are concerned Apple's performance in China, the company second biggest market and a growth driver, would be affected by the country's economic and financial challenges. It added that Apple shares tumbled by as much 13 percent as of early trading on Monday to a year-low $92 in early trading, erasing $80 billion of its market value. The stock recovered later, moving up to $101.16 but still down by 4.3 percent.

Apple is not alone in its swoon. Wall Street is expected to experience a massive selloff that hit market across the globe, as investors raced to unload equities and move to safer investments following the almost 9 percent crash of China's stock market.

Cook said the company remains confident in its business in China given the potential of the market.

"I continue to believe China represents an unprecedented opportunity over the long term as LTE penetration is very low and most importantly the growth of the middle class over the next several years will be huge," he told CNBC.