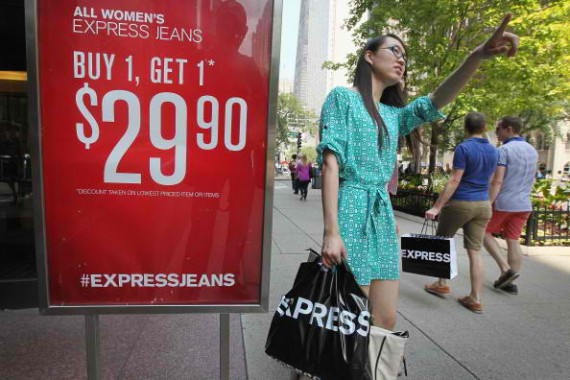 Powered by improving wages and investments, U.S. consumers continued to spend in July despite the economic turmoil around the world.

The Wall Street Journal reported that household in July rose by 0.3 percent from the previous month according to the Commerce Department on Friday. This came as incomes rose by 0.4 percent, the fastest since November, due to improving wages and investments, it added.

Reuters said in another report that that while consumer sentiment slid in August due to the recent swings in the stock market, confidence levels remain in line with solid spending growth. It added that consumer spending, which makes up two-third of U.S. economic activity, was largely driven by purchases of long -lasting manufactured goods such as automobiles, which rose by 1.1 percent.

Gregory Daco, an economist from Oxford Economics, told the Journal the data shows that at least 70 percent of the U.S. economy is healthy and that improved wages would likely cause further housing activity.

The paper, however, noted that economic growth in the U.S. remains unspectacular, and the reading came before stock markets around the world were dragged down by the developments in China.

The Journal added that the data on consumer spending and incomes will likely be weighed by the Federal Reserve against inflation, which continues to remain weak.

John Ryding, chief economist of RDQ Economics, told Reuters that the strong consumer spending numbers as well as the solid GDP figures would likely encourage monetary authorities to finally raise interests for the first time in nearly a decade. It added that the data provides  another evidence that the U.S economy is gaining momentum.

Reuters also reported that the consumer sentiment index fell to 91.9 percent in August from 93.1 the previous month , according to the University of Michigan. It added that the survey showed that consumers are less likely to buy durable goods preferring instead to purchase homes.