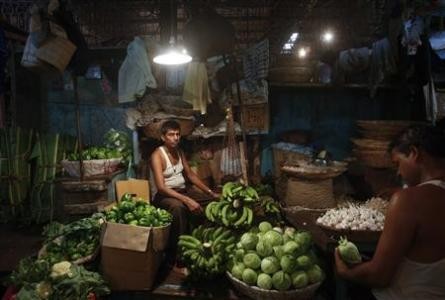 A vendor at a Mumbai food stall on October 14, 2013(Photo : Reuters/Danish Siddiqui)

Inflation in India unexpectedly hit a seven-month high in September as food prices climbed, increasing the odds for yet another central bank interest rate hike even as the economy stumbles through its worst crisis since 1991.

Many analysts now expect him to raise interest rates by another 25 basis points on October 29, even after data showing economic growth in the June quarter hit a four-year low.

"The pickup in inflation is testament to the lingering inflation risks and underscores the need for the RBI to keep its inflation guards up," said Leif Lybecker Eskesen, Chief Economist for India & ASEAN at HSBC in a note.

Federal bond yields posted their biggest advance in three weeks after the data firmed up expectations for a second consecutive rate hike in as many months.

The benchmark 10-year government bond yield ended up 8 basis points on the day at 8.57 percent, its highest since September 23.

India is not the only major emerging market wrestling with inflation and high food costs - China's consumer inflation hit a seven-month high of 3.1 percent in September.

But the pace of growth in food prices in India stood out, rising to an annual 18.40 percent last month, the fastest clip since July 2010 and triple the 6.1 percent rise seen in China.

India's inflation data comes on the heels of Friday's disappointing industrial output numbers. Output grew a much-slower-than expected 0.6 percent in August, hurt by weak investment and consumer demand, dashing hopes of an economic rebound by the end of the year.

The data fills out a picture of high inflation and weak growth in Asia's third-largest economy, which some analysts define as akin to stagflation.

India is struggling to lift its economic growth rate, which hit a decade-low of 5 percent in the fiscal year that ended in March. But Rajan has clearly signaled that he will focus on price stability, which he sees as a necessary condition for raising the rate of growth.

Higher interest rates are likely to further dent hopes of faster growth, however. That will be a worry for Prime Minister Manmohan Singh's Congress party as it campaigns for five state elections starting in November, a warm up for national elections due by next May.

The opposition Bharatiya Janata Party has gained momentum in recent months thanks in part to the performance of the economy under Singh, a veteran economist and reformer.

Inflation is expected to come down in coming months as a slowing economy is likely to keep demand-driven price pressures in check and as this summer's strong monsoon rains may eventually cool food prices.

Yet, price risks persist. Adjustments in domestic prices of subsidized fuel and other imported items following a sharp depreciation of the rupee are still incomplete.

Although the rupee gained 5 percent last month, it is still down around 10 percent this year against the dollar, meaning higher import costs for items such as oil, fertilizer, pulses and edible oil in rupee terms.

Adding to the central bank's worries, core inflation quickened to 2.1 percent in September.