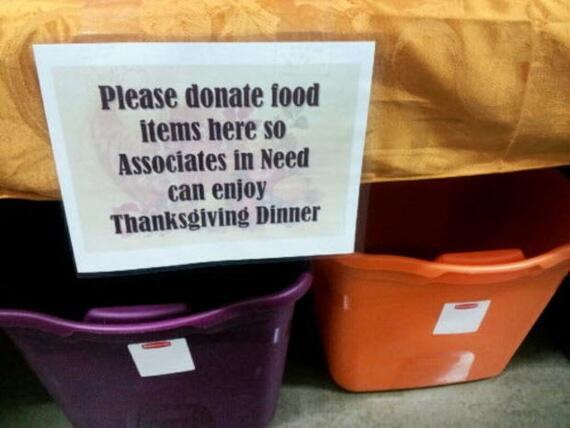 Bins are set-up at a Wal-Mart store for employees to give their associates food items for the holidays.(Photo : Twitter Photo Section)

A Canton, Ohio Wal-Mart employee food drive has sparked concerns about how much the company's employees are compensated The Cleveland Plain Dealer reported Monday.

"(I felt both outrage and anger," Norma Mills, a Canton resident who neighbors the store, and an organizer with Stand Up for Ohio told The Plain Dealer. "Then I went through the emotion of compassion for the employees, working for the largest food chain in America, making low wages, and who can't afford to provide their families with a good Thanksgiving holiday,". "That Wal-Mart would have the audacity to ask low-wage workers to donate food to other low-wage workers -- to me, it is a moral outrage."

The Wal-Mart location has bins in its employees-only section for staff members to give their associates food for the Thanksgiving holiday.

The drive has proven beneficial to employees who cannot afford, and are in need of food items.

"It took a burden off me. I didn't have to worry about how I was getting my turkey to feed them Thanksgiving dinner," Wal-Mart employee Erica Reed told The Plain Dealer.

Reed was out $500 because her childrens' father became incarcerated. This therefore made it difficult for her to feed the siblings.