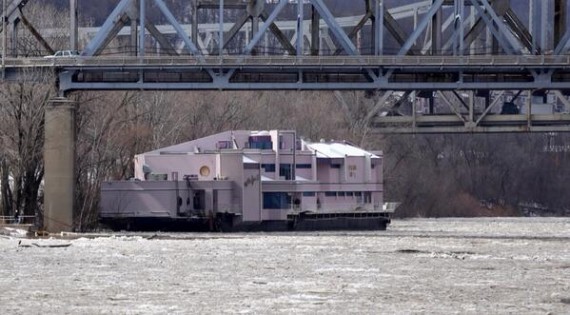 A worker heard the boat separate from the land while walking on the 110 foot ramp leading to the eating establishment belonging to Jeff Ruby.

The boat shifted away from land, down the Ohio River, and into the nearby Clay Wade Bailey Bridge WCPO reported.

"I was down there repairing some holes in the bottom of the boat and the ice coming out of the Licking River piled up and caused it to break loose," Steve Poe one of the workers told WCPO. "A big chunk hit it and I thought a barge hit me," Poe told WCPO. "The ice was so big that it shook the whole boat. It was wild after that."

"I actually saw that one (chunk) coming," Poe told WCPO. "I went to run and try to get off the boat, but it was too late," Poe told WCPO. "I got hold of the rail and it wasn't 10 seconds after I got on the boat that the ramp fell down in the river. I've been down on this river for about 14 years now, so I knew it was time to get off. I just couldn't make it. I was ready for a boat ride, my biggest fear was going down river riding it out," Poe told WCPO.

The boat is now being held in one place via a tugboat and, and a large motorboat WCPO reported.

"The tugs will keep it (in place) overnight and then we have two more (boats) coming in the morning."

The restaurant will be hauled to Hebron, Ky. after utility workers take off its power lines WCPO reported.