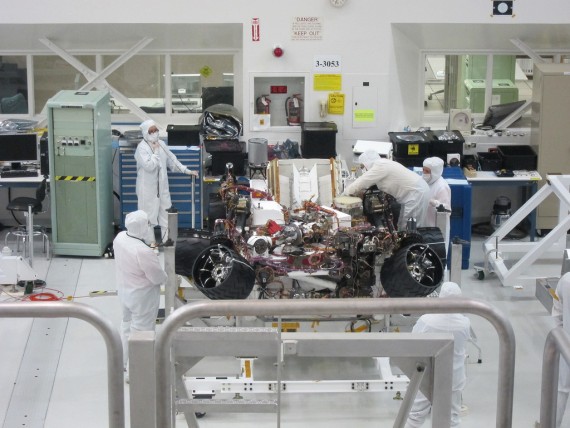 A photograph was taken from the Mars Curiosity Rover of what appears to be an artificial light spreading outwards from the Red Planet. The photo transmitted from the rover as well as from another NASA rover millions of miles away to the Jet Propulsion in Pasadena, Calif.(Photo : Amit Patel)

A photograph was taken from the Mars Curiosity Rover of what appears to be an artificial light spreading outward from the Red Planet.

The photo was transmitted from the rover as well as from another NASA rover millions of miles away to the Jet Propulsion in Pasadena, Calif., according to Chron.

The image was recorded on April 3 by the Right Navigation Camera and shows a unique light on Mars's surface a mile or so away. The light does not look like it is related to the sun or dust storms, which have been known for creating lightning on the Red Planet, Examiner reported.

The light appears to be moving from underground, which means that there could be an underground source of artificial light beneath the surface of Mars.

NASA enthusiasts and bloggers have started to talk about the photo, although an official statement has not been released yet by the agency, Chron reported.

Scott C. Waring, who is in charge of the website UFO Sightings Daily, posted the photo on his website on Sunday and talked about the light's features, such as it being flat at the bottom.

"This could indicate that there is intelligent life below the ground and uses light as we do," Waring wrote. "This is not a glare from the sun, nor is it an artifact of the photo process."

Underground lightning was stated as a possible reason for the presence of the light on Mars. However, what makes this idea unlikely is that Mars has no inner crystal dynamo like Earth's, and its magnetosphere is not as great as Earth's, Examiner reported.

Lensflare has also been brought up as a possible cause of the light. The problem that makes lensflare an unlikely cause is that there are hardly any shadows in the nearby terrain.

The photo was taken at "the Kimberley", a spot where the rover can study rock clues about old environments that might have been able to host life, Chron reported.

"This is the spot on the map we've been headed for, on a little rise that gives us a great view for context imaging of the outcrops at the Kimberley," said Melissa Rice of the California Institute of Technology in Pasadena in a news release.