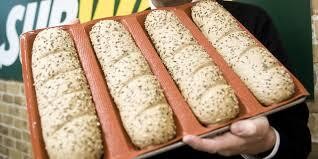 The chemical azodicarbonamide is just about out of Subway sandwich bread.

Subway expects to have the same chemical used in yoga mats completely out of the product and making process in the next week the AP reported.

"Nobody worries about making toast," John Coupland a professor at Penn State University told the AP.

Coupland hopes people see Subway as a healthier option when it comes to selecting what food to eat.

"Maybe there are some people who think Subway is healthy now - that's my concern," Coupland told the AP.

Food blogger, Vani Hari who oversees the blog Foodbabe reportedly began a petition to have the chemical removed because of the freshness the company portrayed.

"The entire point of the petition was that I wanted people to know that eating fresh is not really eating fresh," Vani Hari a blogger of blog Foodbabe told the AP. Hari established the petition that led to the chemicals removal currently in progress

Bakers have used the questionable chemical to stiffen the dough in their bread CNN reported.

The chemical has urethane known as a carcinogen or a substance that can lead to cancer. There is more urethane in the bread when the most azodicarbonamide allowed, or 0.0045 percent is used minimizing the chances humans will become harmed from consuming it CNN reported.

The chemical must meet this requirement through the amount of flour it contains when its used in bread.