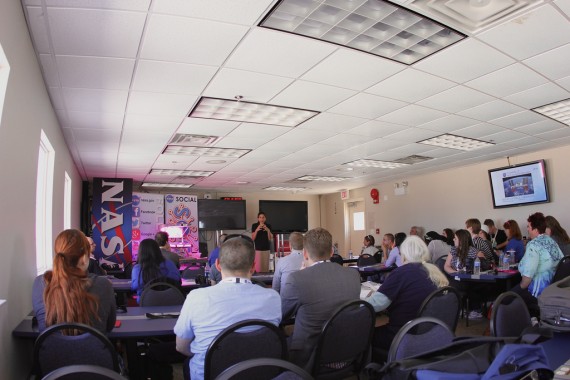 NASA is preparing to launch its Vegetable Production System called “Veggie” to the International Space Station (ISS). The small greenhouse system is designed to provide astronauts with fresh lettuce that can be grown in space.(Photo : Michael Seeley)

The small greenhouse system is designed to provide astronauts with fresh lettuce that can be grown in space, according to CNET.

Veggie was created by Orbital Technologies Corporation, and will specifically grow a type of red romaine called Outredgous.

The system includes LED lighting and seedlings packed in small pillows of soil. If the mission is successful, astronauts may try planting other vegetables, UPI reported.

NASA and the private space flight company SpaceX originally planned to launch Veggie on Monday on their third Dragon resupply effort through its Falcon 9 rocket. However, Falcon 9's launch was postponed due to the discovery of a helium leak before liftoff.

"Our hope is that even though VEGGIE is not a highly complex plant growth apparatus, it will allow the crew to rapidly grow vegetables using a fairly simple nutrient and water delivery approach," said Howard Levine, chief scientist at NASA's Kennedy Space Center International Space Station Research Office.

While the Veggie is less than one foot wide, it is the biggest plant-growth chamber that the ISS has used, CNET reported.

The plants in the system grow in a pillow-like container, which holds the roots while the plant sticks out from a hole at the top.

Gioia Massa, a postdoctoral fellow in the Surface Systems Group of Kennedy's Engineering Directorate, has spent the past two years testing the Veggie with the ISS Research Office on Earth before it's delivery to space, UPI reported.

"VEGGIE could be used to produce faster-growing species of plants, such as lettuce or radishes, bok choy or Chinese cabbage, or even bitter leafy greens," Massa said. "Crops like tomatoes, peas or beans in which you'd have to have a flower and set fruit would take a little longer than a 28-cycle."

Veggie will be used to find ways to supply food on long-term space flights, and also to improve astronauts' physical and mental health in space.

"Based upon anecdotal evidence, crews report that having plants around was very comforting and helped them feel less out of touch with Earth," Massa said. "You could also think of plants as pets. The crew just likes to nurture them."